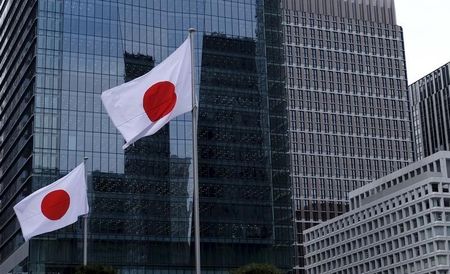 (Bloomberg) -- In what may prove to be one of the most dragged out earnings seasons ever, Japanese companies are reporting their worst drop in operating profits since the financial crisis.

Earnings before interest, taxes, depreciation and amortization for Topix index companies fell 26% in January-March, compared with the same quarter last year, according to Bloomberg-compiled data. That’s based on results from more than 80% of the benchmark gauge’s components, as many companies have delayed results amid the impact of the coronavirus.

The bottom line also collapsed for Japanese enterprises during the period as the nation’s economy sank into a recession. The 89% drop in earnings per share is among the worst in Asia, and much more severe than the 23% fall for S&P 500 companies, the data show. Social distancing has crimped consumer spending; companies have cut investments and exports have slid. Analysts forecast a 21.5% contraction in GDP in the June quarter, a record for official data going back to 1955.

The biggest contributors to Japan’s quarterly earnings and sales declines have been trading companies, metals & mining and auto component makers, according to CLSA Ltd.

Wednesday saw reports from the three major non-life insurers, which usually marks the end of the earnings season. Still, heavyweights including Recruit Holdings Co., Hitachi (OTC:HTHIY) Ltd and Nissan (OTC:NSANY) Motor Co. have yet to announce results. And a large number companies have declined to provide outlooks for future results, or withdrawn previously made predictions.

“While signs are emerging of an end to the pandemic, expectations for earnings recovery remain muted, resulting in a rapid increase in P/E,” Mitsubishi UFJ (NYSE:MUFG) Morgan Stanley (NYSE:MS) Securities Co. strategists including Tsutomu Saito wrote in a note Thursday. “Many remain cautious due to the ongoing downtrend in EPS and companies’ inability to disclose guidance.”

The Topix is trading at 14.5 times 12-month forward earnings estimates, the highest level since February 2018. That’s partially because estimates for earnings per share have fallen to 103 yen, the lowest since December 2016.

In terms of shareholder returns, share buybacks have been scarce after reaching record levels in Japan the past two years. Many companies have also cut dividends or declined to make projections on payouts for the current period.

This has been “an earnings season like no other,” with “alarmingly delayed reporting” in addition to the earnings declines, CLSA strategist Nicholas Smith wrote in a May 16 report. Smith noted that late reporting -- with the last announcement not expected until August -- is complicating plans for annual general meetings, with some companies either pushing back the dates or opting to hold two separate meetings.

Automobile-related sectors have posted the biggest shortfalls in operating profit versus analyst expectations, while airlines have seen the worst drop in operating margins, he said. On the plus side Japanese companies continue to sit on a large cash pile, which Smith sees as “ammunition for an overseas M&A assault and for a resumption of buybacks once conditions stabilize.”

“There is still uncertainty about corporate earnings forecasts and there’s a need for a bit more clarity,” said Yoshihiro Okumura, a general manager at Chibagin Asset Management. “It looks like it will take time, until July and August, when the results for the fiscal first quarter will be out.”

Okumura sees further gains in Japanese equity prices as challenging after the Topix recovered roughly half of its losses from the March selloff.