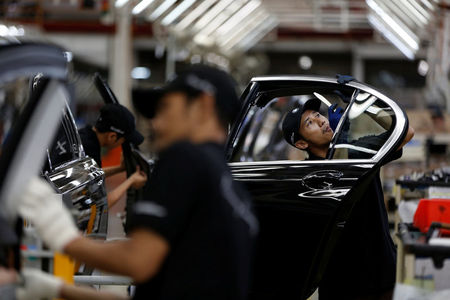 (Bloomberg) -- German factories experienced a record decline in demand in April, underscoring the brutal hit Europe’s largest economy sustained from the shuttering of businesses to rein in the pandemic.

The 25.8% drop in orders is just one indicator measuring the damage. The Bundesbank will offer a fuller picture when it presents its forecasts later on Friday.

While some indicators suggest the economy has already passed the worst, rising unemployment is threatening to delay the recovery -- a scenario the German government is trying to prevent with sweeping fiscal stimulus.

Chancellor Angela Merkel unveiled a 130 billion-euro ($148) package focused on fueling consumption and infrastructure investment this week, taking total spending to more than 1.3 trillion euros, by far the most in the European Union.

The European Central Bank added its own dose of support on Thursday with another 600 billion euros in asset purchases that will stretch to the middle of next year. Despite those efforts, it sees the 19-nation euro economy shrinking 8.7% in 2020.

The Economy Ministry said in view of the gradual easing of lockdown measures, the low point of the industrial recession should have been overcome.

More than 600,000 people have already lost their jobs, and some 7 million more are on temporary state-wage support. With public life slowly resuming across the country, businesses are counting on an improvement in the second half.

The Bundesbank said last month there’s “a lot to suggest” that momentum has already started to pick up, even though the overall decline in output in the current quarter will be steeper than the 2.2% recorded in the January-March period.