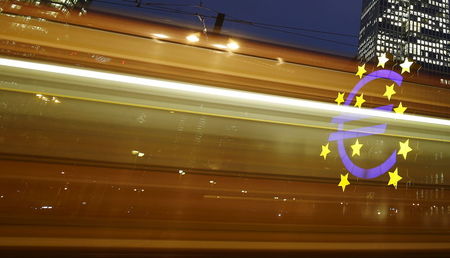 Euro-area inflation slowed to a three-month low in February, highlighting how disruption unleashed by the spreading coronavirus is hitting the bloc’s economy.

A slump in oil and other commodities triggered by factory closures around the world pushed down the region’s headline rate to 1.2%. The reading may buoy investors’ bets that the European Central Bank will add stimulus to bolster the economy, after President Christine Lagarde pledged an “appropriate and targeted” response in a statement late last night.

ECB policy makers are a little over one week away from their next scheduled meeting. Yet action may be taken sooner -- an emergency meeting of Group of 7 finance ministers and central bankers is due to take place at 1 p.m. Frankfurt time on Tuesday. A joint statement is being prepared for release later in the afternoon.

The ECB’s main challenge is that -- unlike the Federal Reserve -- it has limited room to act. There’s little appetite among officials to push the deposit rate further below zero, even though financial markets are pricing in a cut. Asset purchases are already close to maxing out the institution’s self-imposed limits, and liquidity is provided in abundance.

Complicating policy makers’ quest for the best response is uncertainty about whether the crisis is predominantly driven by a hit to supply or demand.

Many companies have temporarily shut down production since the virus broke out in China late last year, disrupting global supply chains. Resulting shortages of certain products could potentially push up prices.

A demand shock, where people stay home and push pause on major purchases, could have the opposite effect. But even then policy makers are questioning whether any more central-bank stimulus would have an effect, and have cautioned against rushing into action.

Core inflation, one of the ECB’s preferred measure to judge underlying price pressures, accelerated to 1.2% in February. Energy prices dropped 1.6% on the month, reflecting a decline in crude oil costs.

Any policy response by the ECB will ultimately depend on how the coronavirus epidemic affects the euro area’s inflation outlook. New economic projections will be available next week, although in a fast-moving situation like the current one, they may already be out of date by the time of publication.

So far, officials have stressed they consider governments and fiscal stimulus the first line of defense -- even though they haven’t fully ruled out action themselves.

“We are not going to overreact,” ECB Vice President Luis de Guindos said on Monday. “We will be calm, prudent. When we do react, it will be in line with our mandate.”