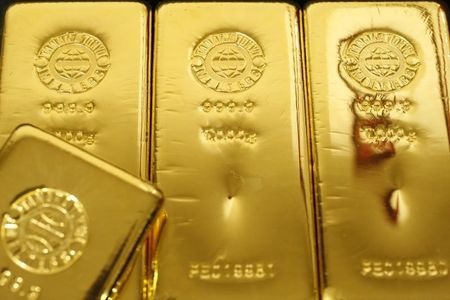 (Updates prices)
By Eileen Soreng
July 29 (Reuters) - Gold eased on Wednesday as investors
booked profits from a record run and caution set in as investors
awaited the end of a U.S. Federal Reserve meeting expected to
reinforce dovish policy to aid a virus-hit economy.
Spot gold XAU= was down by 0.1% at $1,956.39 per ounce by
1153 GMT. Prices hit a record $1,980.57 on Tuesday. U.S. gold
futures GCcv1 rose 0.4% to $1,953.20 per ounce.
"When you're sitting on a very large profit, people want to
take that," independent analyst Ross Norman said, adding the
market was in a holding pattern ahead of the Fed's policy
statement due at 2 pm EDT (1800 GMT). Investors were also monitoring a political deadlock in the
U.S. Congress over a $1 trillion aid plan.
"They're going to have to apply more stimulus in an economy
struggling to get itself out of a hole and if they do increase
monetary injection, it's going to be gold positive," Norman
added.
Gold, considered a refuge against inflation and currency
debasement following widespread stimulus, tends to benefit from
low interest rates, which reduces the opportunity cost of
holding the non-yielding metal.
Fed Chair Jerome Powell "may also comment on plans to anchor
long-term interest rates at a low level by adjusting the forward
guidance and possibly conducting yield curve control,"
Commerzbank said in a note.
"This would cement the negative real interest rates, in
which case new record highs for gold and an increase above
$2,000 per troy ounce would only be a question of time."
Investors continued to pile into gold-backed exchange-traded
funds, with holdings in the SPDR Gold Trust GLD at an over
seven-year peak.
Gold also tracked moves in rival safe-haven the dollar
.DXY , which lingered near a two-year low. USD/ Silver XAG= fell 1.2% to $24.28 per ounce, platinum XPT=
was little changed at $947.52 per ounce and palladium XPD=
fell 1.4% to $2,250.75 per ounce.