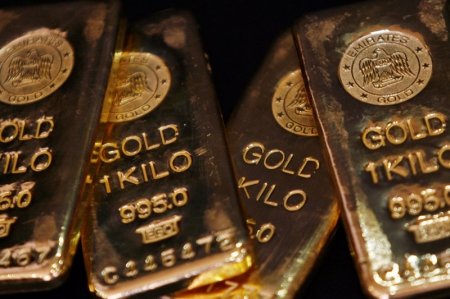 Aug 10 (Reuters) - Gold prices steadied on Monday after a
steep fall in the previous session, as concerns over a worsening
COVID-19 pandemic and intensifying U.S.-China tensions
underpinned the metal's safe-haven appeal.

FUNDAMENTALS
* Spot gold XAU= was steady at $2,033.40 per ounce by 0045
GMT
* Gold fell more than 1.5% on Friday after hitting a record
high of $2,072.50, as the U.S. dollar regained some ground.
USD/
* U.S. gold futures GCv1 rose 0.7% to $2,042.90.
* More than 19.73 million people have been reported infected
by the novel coronavirus globally and 726,414​ have died,
according to a Reuters tally. * U.S. President Donald Trump signed executive orders on
Saturday partly restoring enhanced unemployment payments to the
tens of millions of Americans who lost jobs in the pandemic, as
the United States marked a grim milestone of 5 million cases.
* Investors also kept a wary eye on China's trade relations
with the U.S., after Trump signed two executive orders banning
two popular Chinese apps. * Gold is used as a safe investment during times of
political and financial uncertainty.
* Speculators reduced their bullish positions in COMEX gold
and silver contracts in the week to Aug. 4, the U.S. Commodity
Futures Trading Commission (CFTC) said on Friday. CFTC/
* SPDR Gold Trust GLD , the world's largest gold-backed
exchange-traded fund, said its holdings fell 0.46% to 1,262.12
tonnes on Friday. GOL/ETF
* Physical gold remained out of favour in most Asian hubs
last week as a worsening pandemic kept retail buyers away with
global benchmark spot prices at historic highs. GOL/AS
* Silver XAG= eased 0.1% to $28.28 per ounce, while
platinum XPT= gained 0.9% to $970.12 and palladium XPD=
climbed 0.5% to $2,188.13.