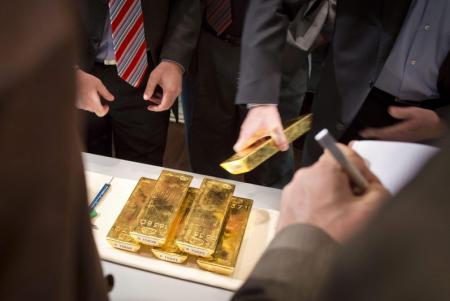 * U.S. unemployment rate falls to 13.3% in May from 14.7% in
April
* Silver faces first weekly decline in five
* Gold set for worst week since March 13
* For an interactive graphic tracking the global coronavirus
spread, open https://tmsnrt.rs/3aIRuz7 in an external browser

(Updates prices)
By Asha Sistla
June 5 (Reuters) - Gold prices dipped more than 2% on Friday
as hopes for a global economic rebound got a boost from
stronger-than-expected U.S. non-farm payrolls data, reducing
demand for safe havens.
Spot gold XAU= slid 1.9% to $1,678.81 per ounce at 1:21
p.m. ET (1721 GMT). U.S. gold futures GCcv1 settled down 2.6%
to $1,683.
Bullion has declined about 2.6% so far this week, on track
for its biggest fall since the week ending March 13.
"We had significantly stronger-than-expected U.S. payroll
numbers - an increase of 2.5 million versus an expectation of a
decline of 7.5 million - that 10-million swing has brought
forward expectations of the economic recovery in the United
States," said Bart Melek, head of commodity strategies at TD
Securities.
Gold was also being pressured by stronger yields and a
slightly firmer dollar, "meaning the opportunity cost to hold
gold in the portfolio has gone up," Melek added. US/ USD/
Wall Street surged following a crash into bear territory as
the latest U.S. data showed a drastic fall in unemployment to
13.3% in May from 14.7% in April as layoffs abated. .N
The data comes ahead of a two-day policy meeting of the U.S.
Federal Reserve next week. The central bank has injected massive
stimulus and cut interest rates to near zero to cushion the blow
from the coronavirus pandemic. However, "we've still got economic uncertainty, trade
tensions, problems in the (United) States," said INTL FCStone
analyst Rhona O'Connell. "For the longer term, the influences
are definitely more positive (for gold) than negative."
Elsewhere, palladium XPD= rose 0.7% to $1,945.81 per
ounce, while platinum XPT= dropped 2.3% to $817.49.
Silver XAG= slipped 2.3% to $17.32 per ounce, and was set
for its first weekly decline in five.