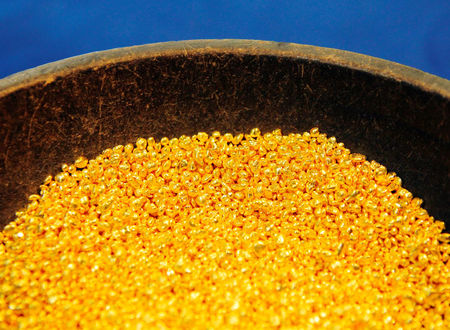 (New throughout; updates prices, comments after Fed statement)
By Swati Verma
July 29 (Reuters) - Gold prices gained in volatile trade on
Wednesday, nearing the last session's record peak at one point,
after the U.S. Federal Reserve vowed to keep interest rates near
zero as the rapid rise in coronavirus cases dampens hopes for an
economic recovery.
Spot gold XAU= was up 0.5% at $1,969.16 per ounce by 4:20
p.m. EDT (2020 GMT), while U.S. gold futures GCv1 settled 0.5%
higher at $1,953.4.
During Fed Chair Jerome Powell's press conference following
the close of the U.S. central bank's two-day policy meeting,
gold jumped as much as 1.1% to $1,980.31 an ounce, just below
the record high of $1,980.57 scaled on Tuesday, but pared gains
soon after.
"The gold price action around the Powell presser - up, down
sharply, recovering - when the chair was careful and neutral,
suggests a developing plurality of viewpoints at current levels
in the market," said Tai Wong, head of base and precious metals
derivatives trading at BMO. "That, after a long rally, indicates
a higher probability of a short-term correction."
The current economic downturn is severe and continued fiscal
and monetary support will be necessary for a recovery, Powell
said, following the release of the U.S. central bank's latest
policy statement. Fed policymakers said they remain committed to using their
"full range of tools" to support the economy and keeping
interest rates near zero for as long as it takes for the economy
to recover.
Massive stimulus packages to aid economies around the world
reeling from pandemic-driven woes and a low interest rate
environment have helped drive gold prices up nearly 30% so far
this year.
"The fundamentals for gold have never been better," said
Jeffrey Sica, founder of Circle Squared Alternative Investments.
But, he said, gold is going to face resistance near the $2,000
level.
"You've a lot of people trading gold short-term now, so we
are going to get some pullback just on what I would consider
simple profit-taking since it's had such an incredible run
year-to-date," Sica said.
In other metals, silver XAG= dropped 1.5% to $24.19 per
ounce, platinum XPT= fell 1.6% to $932.69, and palladium
XPD= slid 5.9% to $2,148.78.