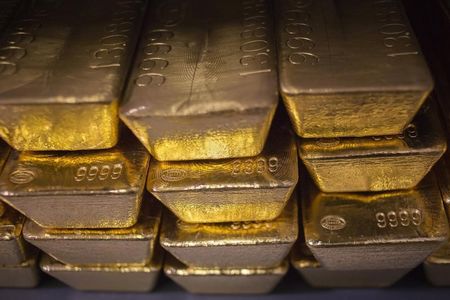 Investing.com -  Few thought it would drag out this long when it was proposed back in July.

But here we are, three months later, still discussing it week after week, because it continues affecting gold, equities and the broad macro story in markets more than anything else.

We’re talking about the prospective second Covid-19 stimulus - or rather the lack of it.

This week, negotiations halted again over a successive instalment to the Coronavirus Aid, Relief and Economic Security (CARES) Act - originally dispensed in April - causing another tumult in the gold and stock markets.

This time, it was Treasury Secretary Steve Mnuchin, who unnerved investors while appearing at the Milken Institute’s Global Conference on Tuesday.

A week earlier, it was Mnuchin’s boss, Donald Trump, who fresh out of hospital and on meds for his COVID-19 infection, announced a no-go in White House stimulus talks with political rival and House Speaker Nancy Pelosi, sending the buy-everything trade crashing. The president recanted that position just two days later after being horrified by the market plunge he caused. The stimulus talks were back on track, sending gold and equity prices back up.

For context, the U.S. Congress, led by Pelosi and the Democrats, approved the original CARES package in the first quarter, dispensing roughly $3 trillion as paycheck protection for workers, loans and grants for businesses and other  personal aid to qualifying US citizens and residents.

Democrats have been locked in a stalemate since with Republicans, who control the US Senate, on a successive package to the CARES, arguing over the size of the next relief, as thousands of Americans, particularly those in the airlines sector, risked losing their jobs without further aid. Trump, who seeks a second term of office in the Nov. 3 election, has accused Pelosi of playing political football over the issue. The House Speaker retorted that any stimulus should be to the advantage of all Americans, and not for Trump’s political expediency.

After Trump’s back-and-forth last week, it was Mnuchin’s turn to sow fresh doubts on the progress over a new CARES when asked about it at the Milken conference. Mnuchin hinted at a modest and “targeted” package, suggesting that Pelosi move some $300 billion of previously allotted money to needy Americans. His comments again torpedoed gold, along with the Dow, S&P 500 and Nasdaq.

Trump, trailing his Democrat challenger Joe Biden in polling for the  Nov. 3 election, has since pressed for a $1.8 trillion package, rambling that he might even do more than the $2.2 trillion demanded by Pelosi. But the president’s top ally in the Senate, Mitch McConnell, said he could only get votes for a $500 billion deal.

A near 1% drop in gold prices for the week, most of it accrued from Tuesday’s 1.8% plunge after the initial push-back on the deal by Mnuchin.

“With the consolidation in gold having likely run its course, the yellow metal is now tracking closely to other momentum-crash precedents, which suggest continued range-bound markets and consolidation until the next catalyst,” TD Securities said in a note. “With that said, stimulus-on/stimulus-off newsflow impacts price action on a day-to-day within the range.”

But stimulus talks aside, gold has been supported by a spike in European COVID-19 caseloads, as Italy again moved near the danger zone last seen in March while the U.K. and France imposed new movement restrictions. In the United States, new cases are up in 39 of the 50 U.S. states.

“Gold has aligned itself with riskier assets this year so a number of things could be the catalyst for an explosion higher, be it a COVID vaccine, U.S. stimulus deal, perhaps even a smooth uncontested election,” said Craig Erlam, analyst at New York’s OANDA.

“The downside risks remain considerable though which is why we’re increasingly seeing this fence sitting. No stimulus or vaccine announcement - or further setbacks in trials - and a contested election in the coming weeks at a time when COVID cases are rising fast could be very negative for risk appetite and hit gold hard,” said Erlam, adding that a test of $1,800 was still possible.

“Indeed, the trigger to catalyze a modest liquidation now stands at $1893/oz,” said the Canadian bank-backed brokerage. “A trigger of this level could potentially mark peak capitulation as even systematic trend followers would be set to liquidate some gold length.”

There’s no certainty if gold prices, which finished above $1,900 levels on Friday, would return under that in the coming week. What’s certain though is that any stimulus talks in the two weeks to the election would be virtually meaningless.

On the oil front, crude prices ended the week little changed as a drop in stockpiles of crude and diesel countered concerns about market direction amid surging COVID-19 caseloads.

Global oil inventories, which ballooned in the second quarter as fuel demand collapsed, are currently falling at a clip of around 3 million barrels a day, Gunvor chief executive Torbjorn Tornqvist told Bloomberg in an interview published on Thursday.  U.S. inventories have fallen in all but two of the last 12 weeks, and last week's declines were considerably sharper than expected.

But while the U.S. drawdowns looked good for supply-demand optics, there were also concerns they could be distorted by precautionary reactions related to the shutdowns forced by Hurricane Delta, which struck Louisiana on Monday as a Category 2 storm.  Nearly 92% of all oil production in the U.S. Gulf of Mexico was shuttered by Delta. With most of those facilities having reopened since, output and stockpiles could rise again in coming weeks.

This week’s global spike in COVID-19 caseloads has also raised alarm across markets. Infections in Italy again moved near the danger zone last seen in March, while the U.K. and France imposed new movement restrictions. In the United States, new cases are up in 39 of the 50 U.S. states.

Gold prices ended a tumultuous week lower as the White House’s back-and-forth on a new coronavirus relief deal hurt those with long positions in the yellow metal.

The EIA also reported that distillates inventories plunged by 7.2 million barrels for the week ended Oct. 9 versus a slide of just 962,000 in the week to Oct. 2.

Reuters reported that the OPEC+ bloc of producers - whose technical experts met in Vienna on Thursday to discuss the state of the global oil market - fear that a fresh wave of the pandemic will hit demand and end the slow process of rebalancing that has been in progress since the summer.

The intention of the OPEC+ bloc, which includes producers such as Russia, is to start raising output again as inventories approach their historical norms. Their current deal on output restraint foresees them raising production by nearly two million barrels a day at the start of next year, on the assumption that inventories continue to fall.

Reuters noted that it's only the worst-case scenario considered by OPEC+'s experts on Thursday that supply/demand could return to a surplus. Even so, that's gloomier than any of the scenario entertained by the bloc a month earlier.

Another factor complicating the supply picture is the return of Libyan production after months of disruption from civil war. The north African country, which is an OPEC member but which isn't covered by the output restraint deal, is now producing some 500,000 barrels a day and some forecasts say it could rise to 700,000 b/d or more by year end.