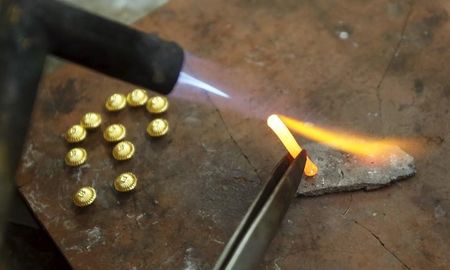 By Barani Krishnan and Geoffrey Smith

Investing.com - Gold prices ended the week on a high note, as escalating tensions between China and the U.S. over Hong Kong and Covid-19 pushed money into the safe haven.

But the gains on Friday were the exception, not the rule, as the yellow metal faced pressure throughout the week as optimism over the reopening of economies across the globe increased.

With prices above $1,700 per ounce, can gold keep pushing higher?

Geoffrey Smith argues that gold is no longer needed as a hedge for inflation and that as soon as the economic uncertainty of the pandemic fades, there will be even less of a reason for money to flow to the safe haven.

Barani Krishnan says the Federal Reserve’s unlimited ability for monetary stimulus and the likelihood of continued trouble between the world’s two largest economies will be enough to take gold to new heights.

Let’s face it, we’re witnessing one of the most challenging periods in what is arguably gold’s best year since the record highs of a decade ago.

Continuous stress to the global economy and health from Covid-19 means safe havens will be in demand for the foreseeable future and there’s promise for gold to reach $2,000 per ounce or beyond by the year end, rewriting its 2011 peak of above $1,900.

But promises are also society's way of ordering the future and their coming true is often contingent on a couple or more permutations.

In the bull case for gold, there are basically two fundamental challenges.

The first is a Wall Street that’s up and raring to go as America strives for a full reopen from lockdowns instituted over the pandemic. Higher risk appetite for stocks typically lures money away from safe havens, such as gold.

Next is the dollar, which has increasingly become a faux safe haven in competition with gold, particularly when U.S.-China tensions escalate. The dollar’s standing as the reserve currency of the world enables it this unique upside, even when U.S. trade might be at risk.

But while there’s daily noise from stocks and the dollar in gold trading, the yellow metal’s breakout from the critical $1,500 range at the start of the year is a clear sign of the wind behind gold.

Despite range-bound trades of the past few weeks, gold has not only held to the $1,600 perch, but also breached $1,760. Year to date, the yellow metal is up 14%, making it the only major commodity that’s in the black for 2020. Oil, in contrast, is down 45% on the year, despite all the positive headlines now about crude's comeback.

Gold’s next major target of $1,800, and subsequent push for $2,000, will be enabled by the Federal Reserve’s virtually unlimited resources and appetite, above that of other world central banks, in aiming trillions of dollars of stimulus at fiscal stresses from Covid-19.

Renewed U.S.-Sino trade tensions after President Donald Trump's insistence of late to blame China for the spread of the pandemic and Beijing's fresh crackdown this week on Hong Kong's democratic rights are other factors that bode well for the bull case in gold.

Why do you want to buy gold? If it’s because you’re afraid of inflation, then you might want to look elsewhere.

The consequences of the current economic shock, just like those of the last one, are going to be deflationary rather inflationary. When millions of people lose their jobs and their income all at once, then prices go down, not up.

Gold prices may rise when inflation accelerates, although the evidence suggests inflation has to rise a lot faster than it has at any time in the last 30 years to have any meaningful impact on gold.

The more convincing bull argument for investors is that the expansion of central bank balance sheets has still inflated the price of financial assets, such as bonds, stocks or, in the case of real estate, the right to rental income streams. And central banks have not come close to deflating those bubbles in 10 years since the last crisis.

Even so, since the start of 2009, when the Federal Reserve planted the seed of quantitative easing in the market’s brain, gold’s returns relative to stocks have been miserable.

Gold prices have risen 87% since then, while the fusty old S&P 500, despite being weighed down by old-economy duds, has risen 257%. The Nasdaq Composite, where the cutting-edge wealth-creating technologies of today’s economy are concentrated, has risen 531%. For optimal long-term accumulation, your investments need to create value, not just store it.

Gold’s outperformance in the last six months owes less to inflation, or the threat of it, than to the acute level of uncertainty created, first, by President Donald Trump’s trade policy and, second, by the coronavirus pandemic. As soon as that uncertainty fades, and it becomes possible to see which products, which services and which technologies are demanded by the post-Covid world, then investment capital will revert from flow out of value stores and into value creators.

At that point, gold, without the downside protection of short-term bonds, will become a very expensive hedge against uncertainty. Gold was in a bear market lasting four years from its peak in 2011 to its trough in 2015. In that time it lost more than 40%.