Be the first to comment
Currencies and equities traded higher on the back of better-than-expected economic data and reports from Russia that it has won the global vaccine race. While Russia announced the world’s first approved vaccine, it has not finished phase 3 trials, which the World Health Organization deems essential for statistical accuracy. There are currently eight other vaccines in phase 3 trials from the U.S., U.S./UK, Germany and China. Nonetheless, pharmaceutical companies are getting close and the single most important game changer for the global economy could be right around the corner. The persistent gains in stocks reflects the market’s optimism and its hope that medical advances made over the past few months puts the worst behind us.
Although the U.S. dollar ended the day lower against all of the major currencies except for the Japanese Yen most of those losses occurred during the Asian and European hours. During the New York session, dollar bulls were in control. Stronger-than-expected producer prices helped along with an uptick in Redbook retail sales ahead of Friday’s consumer spending report. Yet, bonds were the primary driver of dollar gains. Ten-year Treasury yields saw their single biggest one-day rise in more than two months as the S&P 500 headed for a test of its record high.
The euro continues to be one of the strongest currencies. Despite signs of a double-top and its struggle to close above 1.08, the pair still managed to outperform most of its peers. The expectations component of the German ZEW survey also rose to its highest level since 2003. Investors were less confident about current conditions but very optimistic about where the economy is headed, which is testament to the local government and EU’s efforts. Industrial production numbers from the Eurozone are scheduled for release tomorrow and the outcome is expected to be better as well. Although EUR/USD remains at risk of a double-top correction, the single currency could continue to outperform its peers.
Sterling also traded higher, but mixed labor market numbers held the currency back. Even though the unemployment rate improved, claimant count increased much more than expected in July and average hourly earnings fell. The only reason why the jobless rate improved was because unemployed workers are discouraged from looking for new work. Tomorrow’s second-quarter GDP numbers also poses a risk for sterling. Although spending and trade improved towards the end of the quarter, Q2 was a tough one for many countries and the UK is no exception.
The focus shifts to New Zealand tonight with a Reserve Bank’s monetary policy announcement on the calendar. New Zealand was one of the first countries to defeat COVID, reporting 100 days without community transmission. Unfortunately, just 24 hours later, it reported its first outbreak with four members of one family testing positive for COVID-19, prompting the government to put its largest city into lockdown. Auckland was placed on level 3 lockdown for the next three days, which involves closures of restaurants, bars, schools and nurseries. Travel out of the city will also be restricted as Prime Minister Jacinda Arden orders stay-at-home measures. The rest of the country will go to level 2 with mass gatherings limited to 100 people and physical distancing of two metres in public areas. The New Zealand dollar extended its losses on the back of these latest developments as investors wonder how this will affect the RBNZ’s views.
Recent data also shows New Zealand’s recovery losing momentum. According to the table below, since the last policy meeting in June, consumer and business sentiment weakened as spending softened. Home sales are growing, but building permits and house prices are relatively stagnant and inflationary measures are mixed. So while the central bank has no reason to question the direction of the economy, these reports could curtail its optimism. As for the Australian dollar, it shrugged off weaker business confidence as the Canadian dollar rallied on the back of stronger housing starts. 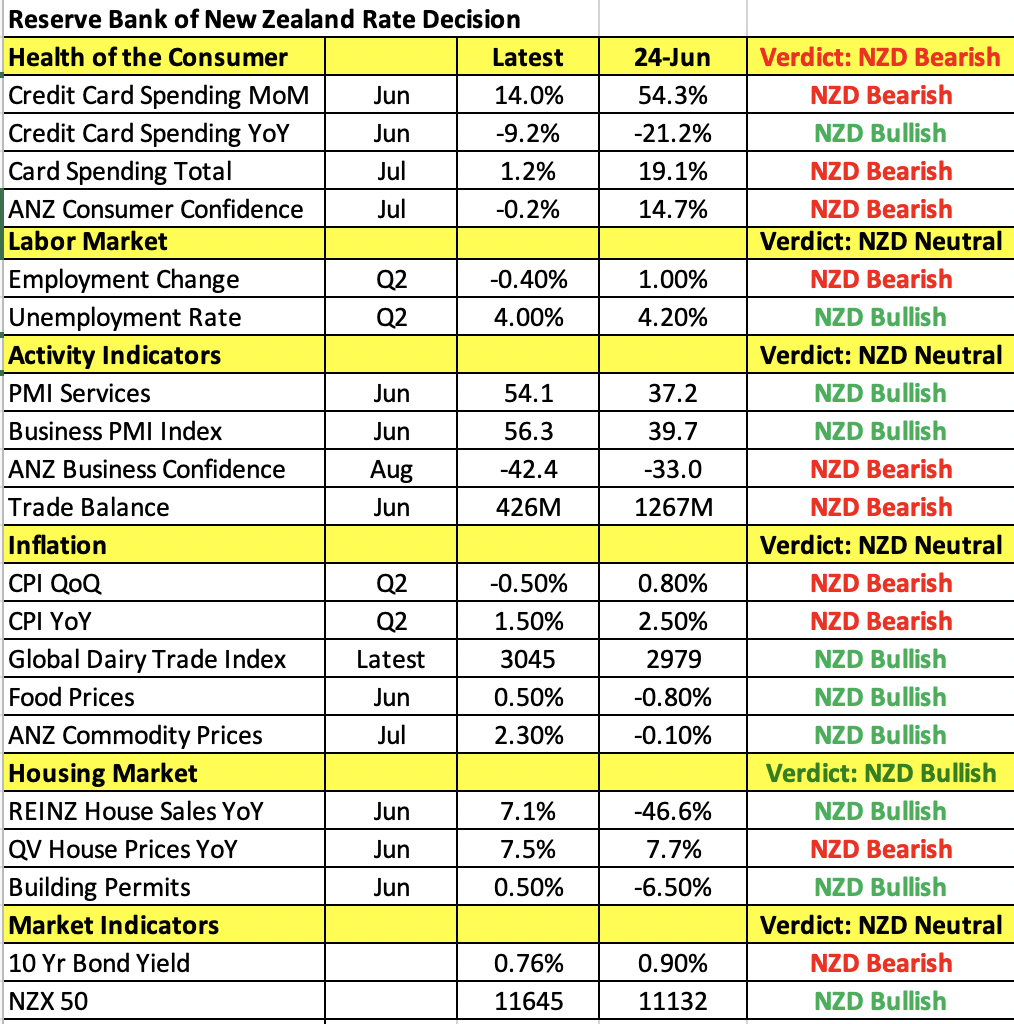