While The World Groans Over Oil, Ethanol’s Suppliers Quietly Weep

While The World Groans Over Oil, Ethanol’s Suppliers Quietly Weep

Across the commodities universe, the loudest rumblings are about the carnage in oil, Monday’s historic subzero prices for U.S. crude and how finding tankers to store oil is like finding ventilators in some countries for COVID-19 patients.

But there are also two other constituencies in the raw materials space hurting from the demand destruction in energy caused by the coronavirus — and their voices have been almost drowned out by the din in oil.

They are the humble corn and sugar growers who supply the feedstock for ethanol, the biofuel mandated as additive to petroleum in India and Brazil and gasoline in the United States. 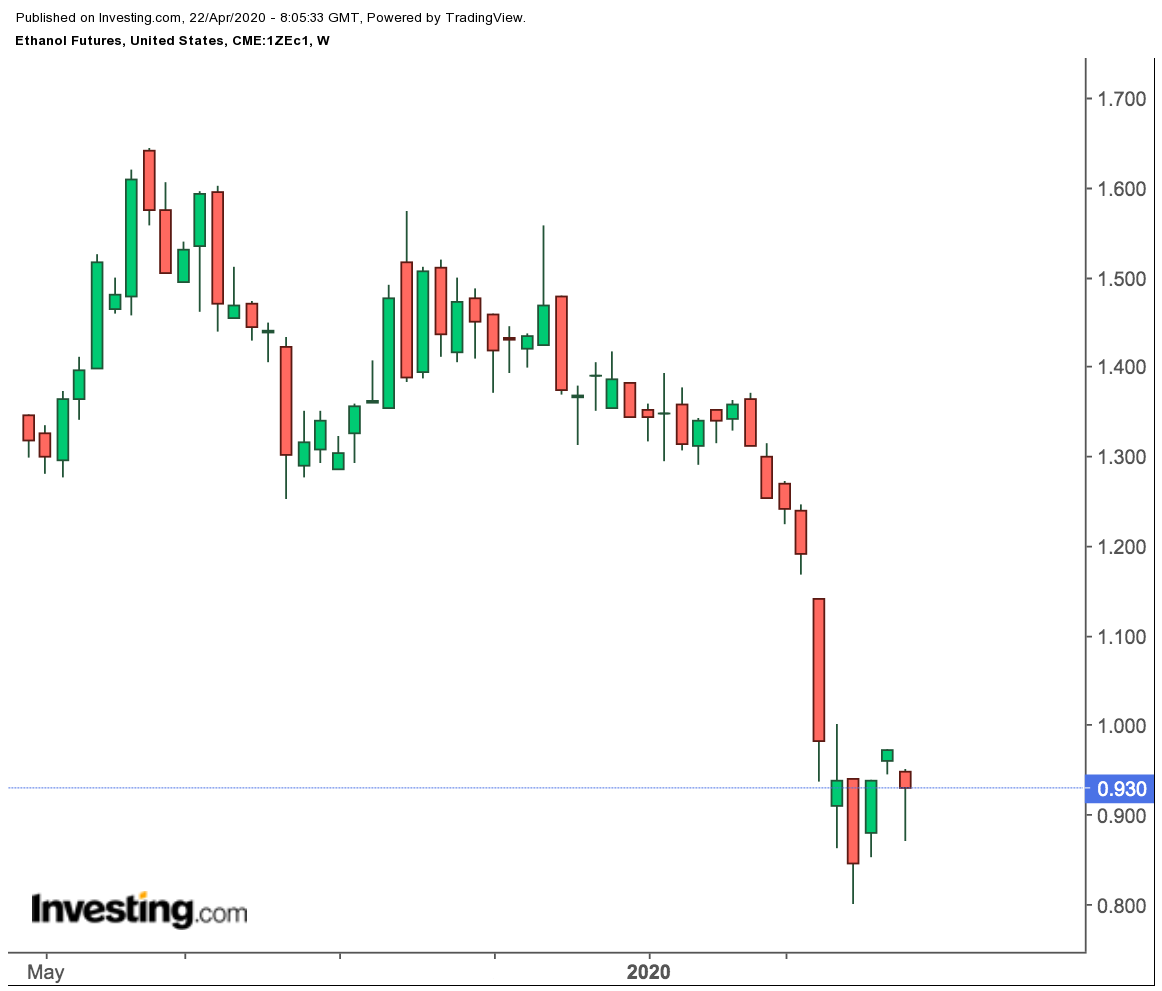 The reality is that there's as much need to produce ethanol now as there is to make motorcar fuel. With half of the world’s 8 billion people under restricted mobility to control the virus’ spread, almost no one is driving unless absolutely necessary.

Sugar prices on ICE Futures U.S. hit a near 12-year low of 9.55 cents a lb on Tuesday, losing 33% since the end of January. Corn futures on the Chicago Board of Trade struck a four-year bottom at $3.09 bushel, down 20% since the close of December. 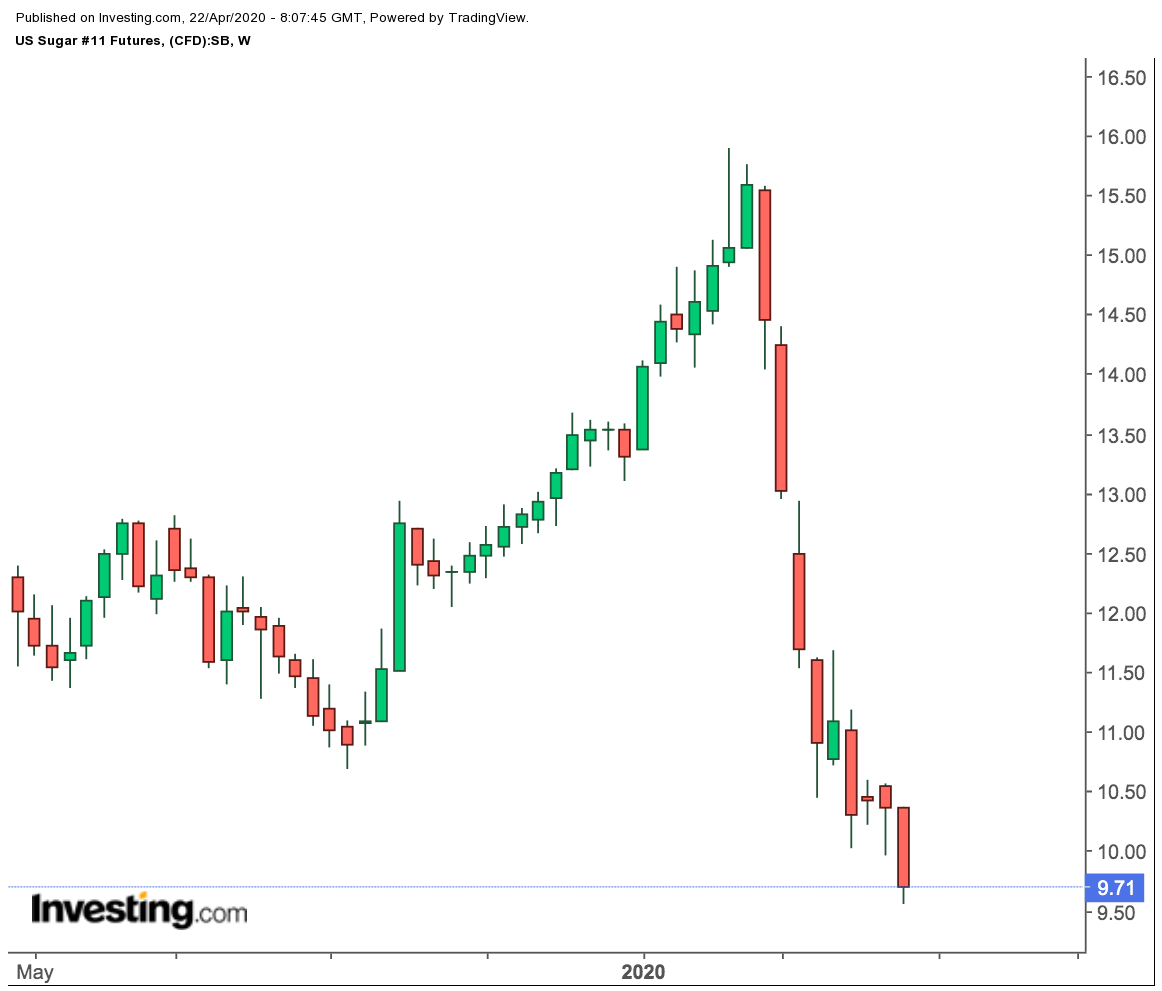 The price of ethanol itself, quoted once every few days on the CBOT due to the lack of daily volume, hasn’t done too badly despite Monday’s oil crash, losing just 4% on the week. According to the latest quote from April 19, it was only at a one-month low of 86 cents a gallon. For the year though, ethanol futures were down 32%.

The real pain, however, is being felt by cane growers in India’s prolific sugar state Uttar Pradesh and Brazil’s Sau Paulo, as well as farmers in the Corn Belt that stretches across the U.S. Midwest.

Even before the start of April, Indian sugar mills had difficulty supplying domestic oil marketing companies with ethanol to be mixed into petrol and diesel, after drastic lockdown measures imposed by Prime Minister Narendra Modi’s administration took almost all non-essential traffic off the roads in the near 1.4-billion people nation.

This week’s horror story in oil — and the manic race by anyone in the physical crude business to find any place to store the commodity—from tanks to barges, VLCCs, pipelines and even rail cars — is going to make it worse for those producing agricultural feedstocks for ethanol.

“Concerns that ethanol production will not start to increase anytime soon is still a drag on (agricultural) futures prices,” said Clif Droke, a commodities specialist at Financial Sense Wealth Management.

“Unfortunately, the action in energies weighed heavily on the corn market as well yesterday, as many assume another nail was pounded into the coffin of the ethanol casket,” Hueber wrote in a commentary that referred to Monday’s crash in oil.

The author of The Hueber Report on grains said it was difficult to argue with the logic of correlating lower corn usage with lower ethanol production.

But he noted that it was also the norm for markets to build worst-case scenario models that pushed prices well below realistic levels.

“That is the position I believe corn sits in right now, and the price action throughout the balance of this month will be little more than market ‘noise,” Hueber said.

Crop scouts report that COVID-19 notwithstanding, farmers in the Midwest were already accelerating their seeding pace as warmer spring temperatures set in, adding to expectations for a massive U.S. corn acreage in the coming harvest. 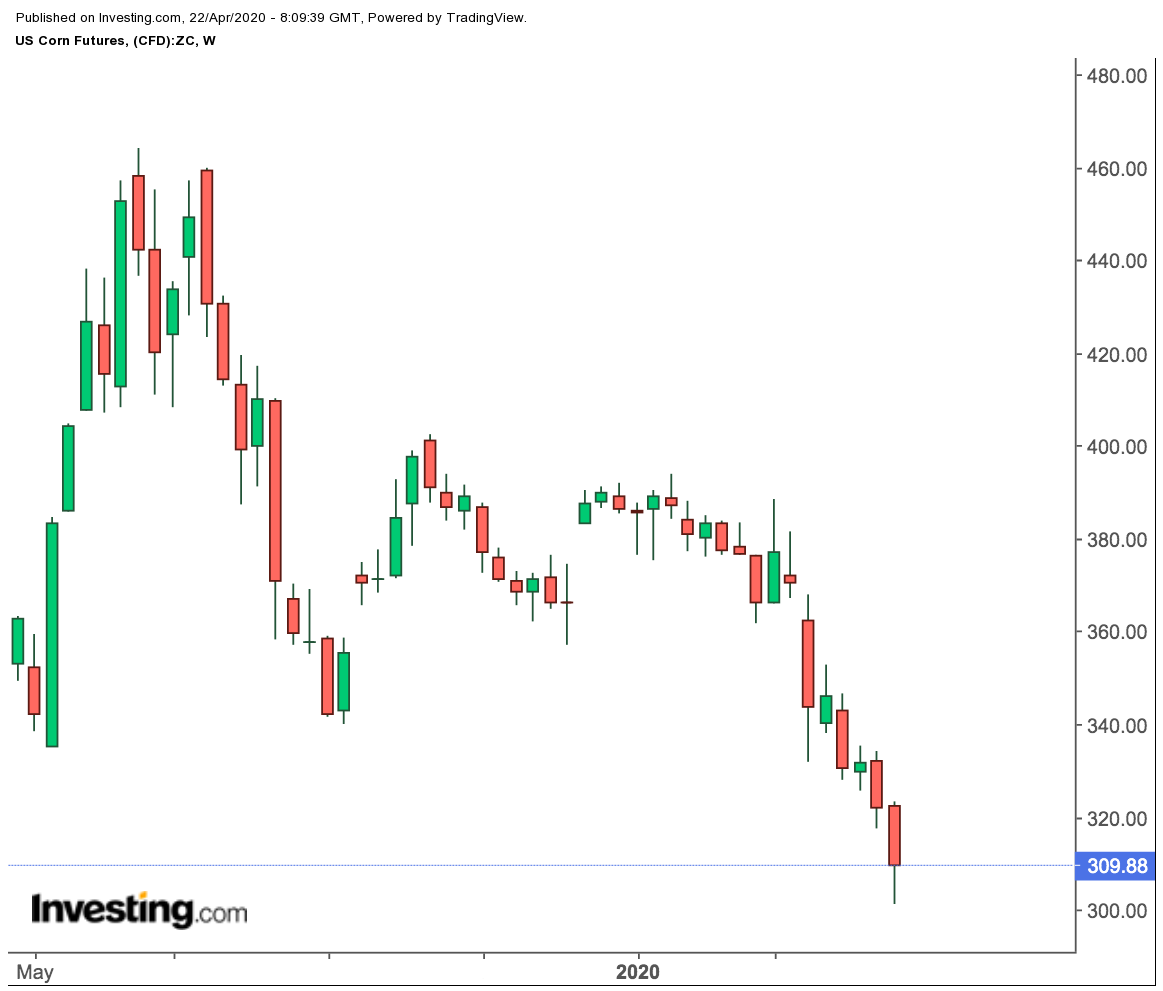 "Farmers are already out in the fields, ignoring raindrops, and serious planting is expected to get done this week, on the order of a quarter of the crop," Charlie Sernatinger, global head of grain futures at EDF & Man, said in a note to clients.

The U.S. Department of Agriculture said on Monday farmers in the country had planted 7% of their intended corn area as of Sunday.

In sugar’s case, industry researcher Czarnikow Sugar recently forecast a 2-million-ton drop in global sugar consumption owing to the virus. In the note, analyst Ben Seed said aside from the consumption decline in the 2019/20 season, worldwide sugar consumption in 2020 was likely to be lower on a per capita basis.

Despite retail-level stockpiling of sugar — and hoarding by individual consumers —  worldwide demand for the sweetener was expected to drop considerably due to restaurant closures, as well as fewer parties and celebrations owing to the pandemic, Droke of Financial Sense Wealth said. He added:

“Moreover, traders will need to watch for a potential increase in sugar supplies from Brazil in the next few months as its harvest season gets into full swing this spring."

“In view of these factors, a heavy cash position is recommended for now as we wait for the damage inflicted on the market by the coronavirus to abate."