U.S. Dollar Tanks As Trump Talks Up Markets, RBNZ Next

U.S. Dollar Tanks As Trump Talks Up Markets, RBNZ Next

Be the first to comment
In the last 24 hours, U.S. President Donald Trump and White House officials have been out in force, aggressively trying to talk up the markets. Stocks consolidated near their highs last week and did not necessary require the extra lift, but the President may have wanted a morale boost in the form of equity gains after the low turnout at his Tulsa rally last Saturday. Regardless, investors responded positively to Trump’s reassurance that the U.S.-China trade deal is still on and yesterday’s talk of a new $1-trillion-plus stimulus package. With very little market-moving U.S. data on the calendar this week, we said headlines (particularly stimulus related) would be the main driver of market flows. The confusion caused by White House Trade Adviser Peter Navarro’s retraction of an earlier comment that the U.S.-China trade deal is over also highlights the fickleness of the administration and its sensitivity to public sentiment.
While stocks rallied, the U.S. dollar traded lower against all of the major currencies, with USD/JPY falling to its lowest level in six weeks. Service and manufacturing activity improved in the month of June, according to Markit PMIs but less than expected. New home sales rebounded, but this report failed to help the greenback. The sell-off in the dollar coupled with the rise in gold, which hit a fresh seven-year high, is a sign that investors are not convinced that trade relations between the U.S. and China are moving forward and that Congress would approve such a big stimulus package.
Stronger than expected Eurozone PMIs drove EUR/USD above 1.13. Manufacturing and service sector activity improved in Germany and the region as a whole in June, which is consistent with the general recovery that we’ve been seeing in the economy. The Eurozone composite PMI index rose to 47.5 from 31.9. The German government also said it don’t expect a second-wave economic collapse. Sterling’s gains were more modest even though the UK also reported improvements in manufacturing and services. In fact, the manufacturing PMI index rose above 50 to 50.1, indicating a very modest expansion. Prime Minister Boris Johnson also relaxed social distancing rules, allowing for two households to meet in any setting and reducing the two-metre distance restriction to one metre. Tourism will also be reopened, along with pubs, cinemas, galleries and libraries. Yesterday, we pointed out that the UK reported its fewest number of cases since March, which gave the government the confidence to announce these latest measures.
The Canadian, Australian and New Zealand dollars extended their gains. AUD benefitted from positive U.S.-China trade headlines and stronger PMIs from the Commonwealth Bank. The loonie’s gains were more modest after the U.S. threatened to reimpose a 10% tariff on aluminum imports from Canada by the end of the week if Ottawa doesn’t voluntary restrict exports.
The Reserve Bank of New Zealand has a monetary policy announcement this evening and aside from keeping rates unchanged, we expect a more upbeat outlook from Governor Adrian Orr. New Zealand ended social distancing approximately two weeks ago, which should have a big impact on economic activity. In May alone, credit card spending jumped 54%, according to one measure, and 80%, according to another. With social distancing ended, we expect further upticks in spending. The following table shows broad based improvements in NZ data since May and the ones that deteriorated, like Q1 retail sales and GDP, are very dated at this point. The business PMI index is lower in May compared to March but up from April levels. While Orr previously expressed willingness to drop rates to negative levels, the chance of that happening at this point is slim. With that said, there’s no downside to sounding cautious, and if Orr feels that way, NZD could succumb to profit-taking. Unambiguous optimism would carry NZD to fresh highs. 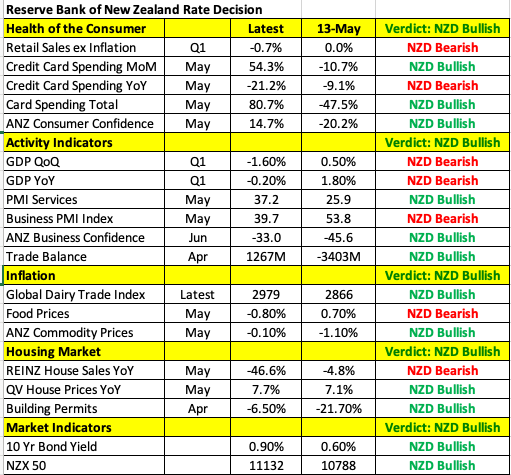