OPEC+ surprised markets by announcing that Russia and Kazakhstan would be permitted to increase their production for February and March by a total of 75,000 bpd. All other producers would keep their production rates steady.

However, at the press conference, Saudi oil minister Prince Abdulaziz bin Salman, gleefully delivered a “surprise” announcement that Saudi Arabia would voluntarily cut 1 million bpd of its own production for February and March. He also referenced an additional voluntary 425,000 bpd cut from other Arab producers, but there has not been any further information on that potential extra cut. 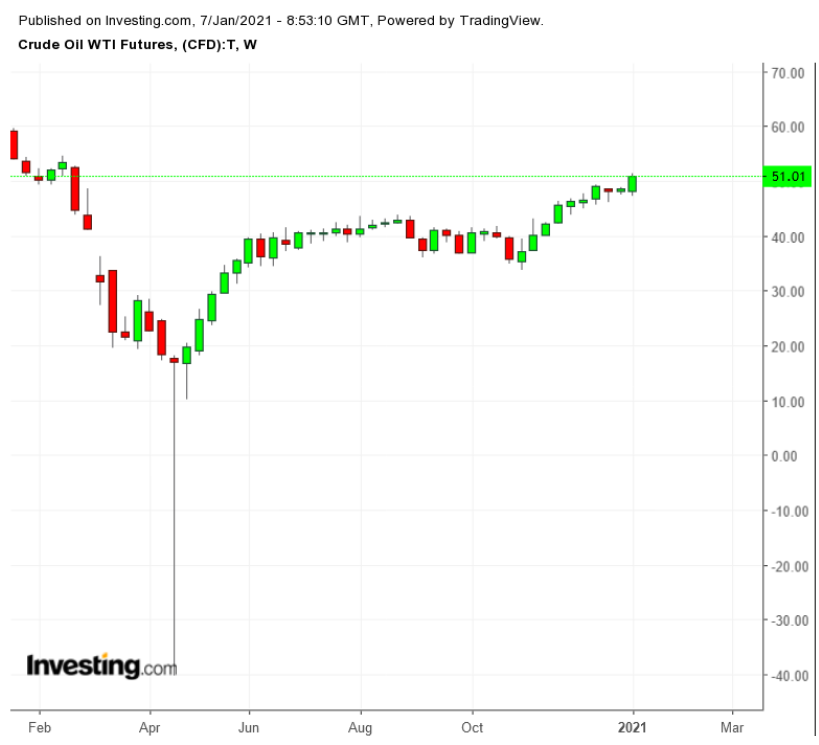 The oil market was pleased with this “surprise.” Both Brent and WTI gained about 5% for the day on Tuesday, but the movement upward was minimal on Wednesday.

Here are 4 key implications of this move that market watchers should note.

There isn’t even a question that the Saudi “surprise” is a gift for U.S. frackers. The U.S. oil industry underwent significant consolidation in 2020 and made even more efficiency gains.

The process is ongoing and U.S. production is likely to see further declines as a result. However, there are companies still producing in critical shale oil regions that are well capitalized and well positioned to take advantage of the price increase the Saudis have afforded them.

Traders should expect to see production increases from these companies as prices rise, if they continue to rise. Whether it is enough to offset other declines in U.S. production remains to be seen, but already some companies are considering adding more rigs.

The 1 million bpd is coming out of Saudi Arabia’s production, but Aramco (SE:2222), Saudi Arabia’s national oil company, keeps a large amount of oil in storage at any time to make sure it can always fulfill its customer’s requests. Aramco will fill any orders that can’t be met by production through its existing inventory.

Aramco has already issued higher OSP’s (official selling prices) to its Asian customers, which could mean customers who don’t have long-term contracts with Aramco may look for lower priced oil on the spot market, perhaps from Iraq or the United States.

3. Saudi Arabia is trying to be a swing producer, but that won’t work

Prince Abdulaziz tried to spin the decision to cut production as a “gift” intended to “preemptively” bolster the market in case governments continue to impose demand-killing economic lockdowns from the coronavirus past January. However, the fact remains that Saudi Arabia is now trying to be the swing producer for OPEC+, but it cannot succeed in this role long term.

A swing producer can only succeed if there is no other spare capacity to replace its absent supply. However, there is currently plenty of spare capacity from the U.S., Iraq, Russia and others. Saudi Arabia tried this before, in the 1980s, when it cut its own production to try to support prices, and that was generally unsuccessful.

Saudi Arabia and Aramco both lost a lot of money at the time and suffered as a result. After learning from the 1980s, Saudi Arabia’s most recent past oil ministers, Ali al-Naimi and Khalid al-Falih, both refused to cut Saudi Arabia’s production unless everyone else in OPEC and OPEC+ cut production as well. Now, with Russia permitted to increase production, Saudi Arabia’s large cut will be seen as compensating for Russia.

This could set a precedent for the future that could easily undermine the integrity of the OPEC+ group. At some point, Saudi Arabia will need to stop trying to compensate for others.

4. Other OPEC and non-OPEC producers liable to cheat more

Saudi Arabia had been cracking down hard on countries that were over-producing their quotas in 2020. This included pushing countries to cut production to compensate for their own prior cheating.

These compensation schemes were moderately successful, though chronic over-producers like Russia, Kazakhstan and Iraq never fully adhered to their quotas. Now that Saudi Arabia has shown itself willing to cut its own production to compensate for increases by other producers, it will have an even harder time forcing countries like Iraq and Nigeria to adhere to their quotas.

It’s likely that we will see oil production inching higher from some OPEC+ countries in February and March. OPEC+ as a whole will probably report group compliance numbers of better than 100% because Saudi Arabia’s production cut will count as excess compliance.