With the third-quarter earnings season almost over, it’s becoming clear that technology companies, which powered the market’s nine-year bull-run, are returning with a roar after a little pause in the summer.

If the trend holds up for the remaining part of 2019, technology stocks could finish up their best year in a decade, highlighting investors’ strong faith in companies that produce memory chips, cell-phones, and some of the U.S. largest social media giants. 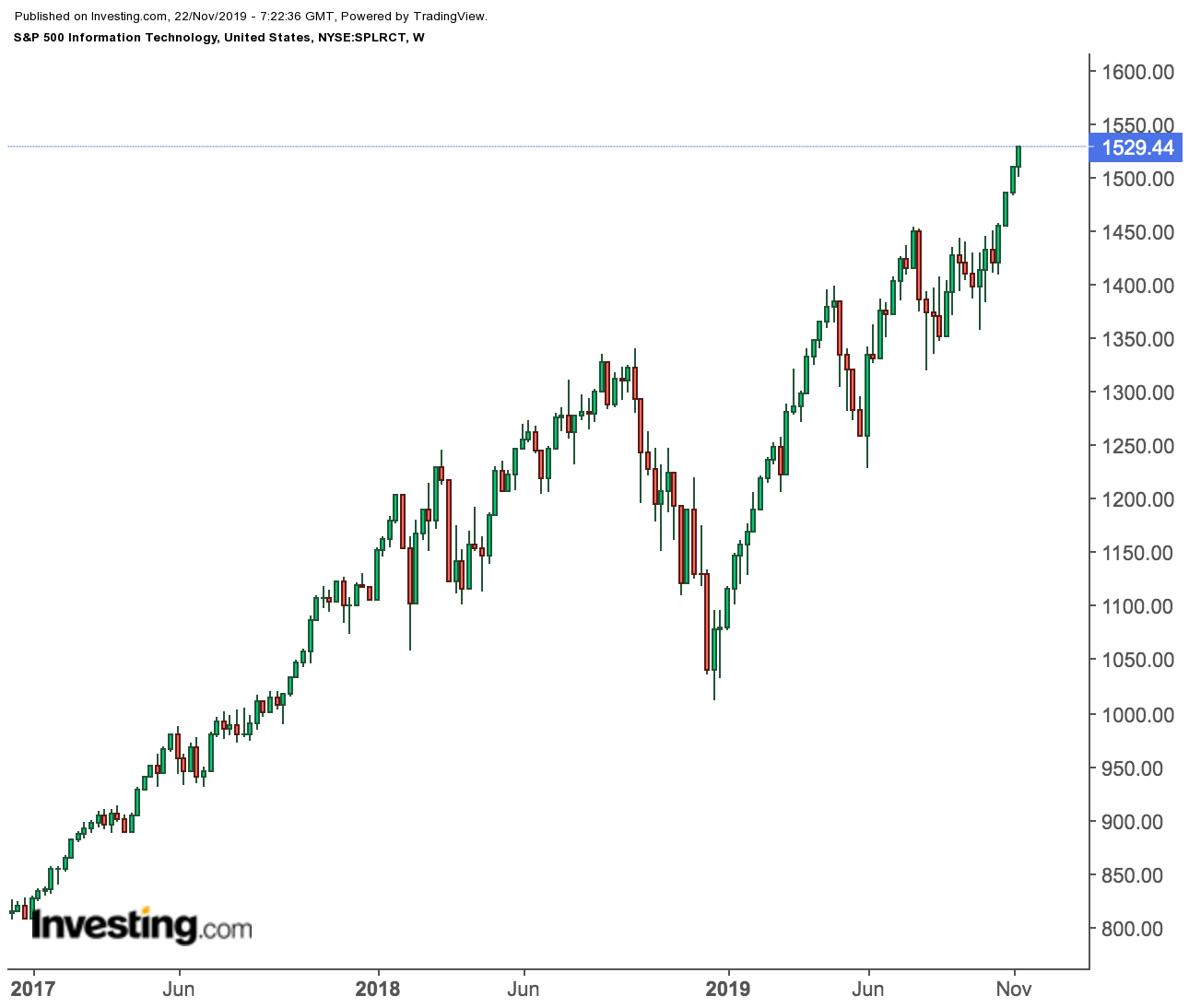 The S&P 500 technology sector has gained 41% gain for the year, keeping it well ahead the S&P 500's 24% climb and on course for its biggest one-year advance since 2009. This strong comeback comes despite mixed earnings reports from this sector. Besides Apple (NASDAQ:AAPL) and Google parent Alphabet (NASDAQ:GOOGL), other giants from the FAANG group failed to produce Q3 earnings which were extraordinary.

Among the technology stocks, investors also found great value in the sector which produces chips for smartphones, gaming and for data centres. This year the ETF that tracks the sector, the VanEck Vectors Semiconductor ETF (NYSE:SMH), has jumped roughly 50%. In the last month alone, the ETF has gained over 9%. 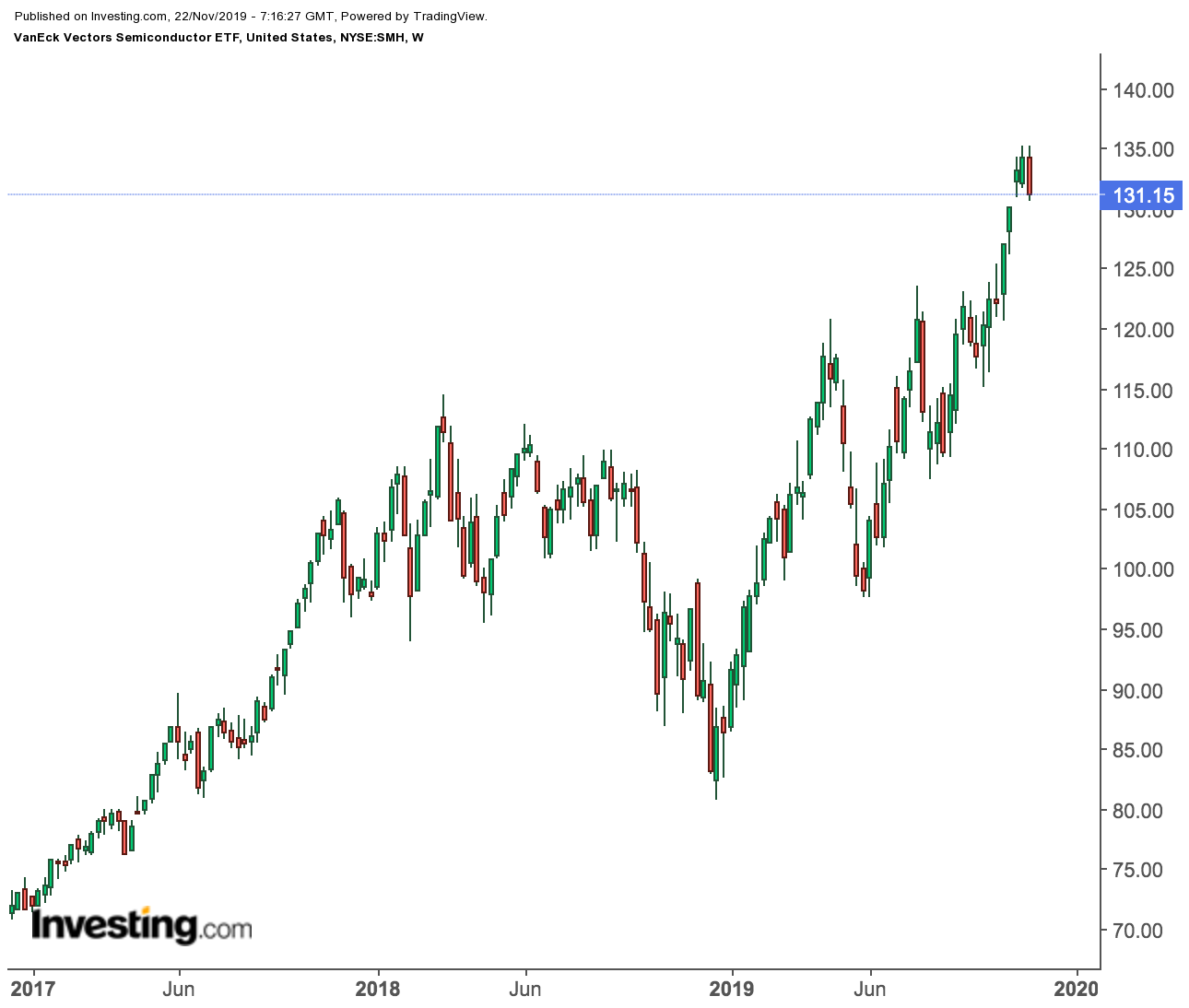 Among the biggest gainers in the sector are semiconductor manufacturers, as well as the companies that create devices to make chips. These gains suggest investors are confident that technology companies will be able to continue delivering robust sales and earnings growth even as the broader economy shows signs of cooling.

One important area of the market that showed some cracks appearing is retail. Sluggish sales at Home Depot (NYSE:HD). and Kohls Corp (NYSE:KSS) showed not all retailers are having a field day and these companies do need some internal adjustments.

Home Depot (NYSE:HD) blamed its disappointing quarterly sales numbers on investments taking longer than anticipated to pay off. The home-improvement chain has been trying to more closely integrate its online business with its network of about 2,290 brick-and-mortar stores over the last few years. But if you look at the big-box retailers, it seems the party is still on.

Walmart Inc (NYSE:WMT) boosted its full-year earnings outlook early this month and reported that U.S. comparable sales in the latest quarter rose 3.2% from a year earlier, ahead of analysts’ estimates. The increase in comparable sales reflects both growth in transactions, a proxy for traffic, as well as ticket prices, which can reflect consumers buying pricier goods or filling their baskets with more items. The company also recorded a 41% increase in e-commerce sales from a year earlier, putting its full-year estimate for online sales growth of about 35% within easier reach.

Another retail giant, Target Corporation (NYSE:TGT) raised its full-year outlook again after reporting strong sales and profitability for Q3. The retailer has been a star performer this year by opening smaller locations in urban areas, introducing a steady stream of new store brands and expanding the number of ways customers can get their orders. The stock had soared 91% this year through Thursday, massively beating other peers.

For the remaining part of the year, retailers will continue to benefit from strong consumer spending, a low unemployment rate, rising wages and low gasoline prices.

Unlike retailers, industrial companies didn’t show much hope for a rebound in their sales for this year. 3M Company (NYSE:MMM), one of the world's largest industrial conglomerates that makes things from Post-its to air filters and touch screens, lowered its earnings and revenue forecast for 2019 last month, with Chief Executive Officer Michael Roman citing a “challenging” macroeconomic environment. That weakness was broad-based, suggesting demand for its industrial products is getting hit from all directions.

The world’s largest mining and construction equipment maker, Caterpillar (NYSE:CAT) reported the first decline in quarterly profit in almost three years and said it expects demand to be flat in the fourth quarter.

The earnings season for the third-quarter clearly showed that the corporate Americas’ two largest pillars — technology and retail -- are coping well with an economic uncertainties after the U.S.-China trade war and the earnings recession didn’t spread to other part of the economy. That being said, the risks to growth have not subsided completely and the next quarter may offer more clues.