This is part two of our annual outlook for the coming year. Part one focused on the direction equities could take in 2020.

During 2019, equities rallied to all-time highs despite ongoing concerns about slowing global growth.

Brexit woes and U.S.-China trade tensions dominated headlines throughout 2019, but progress made on both fronts—Boris Johnson's resounding victory in mid-December and the possibility of a Phase One trade agreement—eased investor concerns. As well, financial markets virtually ignored Trump’s impeachment, on the assumption his removal from office is unlikely.

During the year, the U.S. Federal Reserve cut interest rates three times, while the European Central Bank's Mario Draghi delivered fresh monetary stimulus before the end of his tenure as the ECB president. In November, Christine Lagarde took over the position.

Hong Kong, the center of finance in Asia, has been wracked by anti-government protests that began in June. The uncertainty since has been weighing on equities and burdening both the local and possibly global economy, keeping markets cautious.

Gains in oil markets have been tempered by fears of slowing demand growth as well as record high production from the U.S. Although crude climbed around 34.46% in 2019, this increase appears less dramatic when considering the commodity dropped about 25% from October through December of 2018.

Here's what some of our most followed contributors expect from gold, the U.S. dollar, and markets in general as 2020 begins.

Matthew Weller: Will King Dollar Regain His Throne in 2020?

When setting expectations for the currencies to watch in the year ahead, over the past couple of years, I’ve leaned heavily on longer-term positioning data from the CFTC’s Commitment of Trader (COT) report.

As we flip our calendars to a new decade, FX traders are not showing any extreme imbalances relative to the last year. However, it’s worth noting that bullish positioning in the U.S. dollar has moderated toward its 52-week low, potentially setting the stage for another leg higher in the world’s reserve currency. 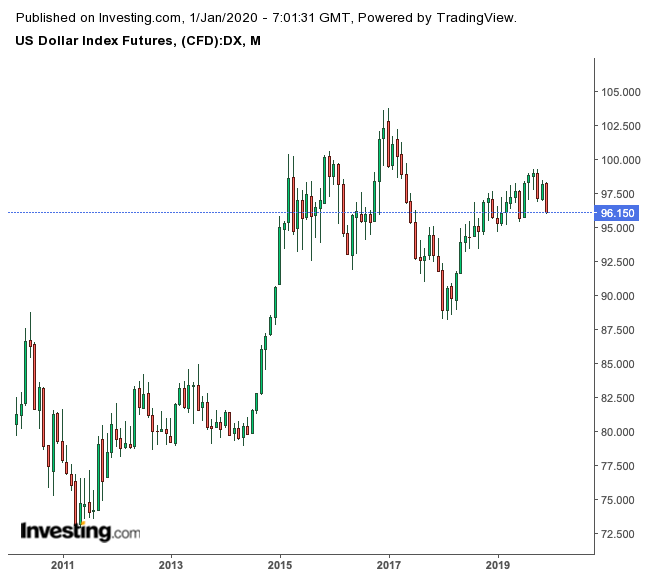 This high-level sentiment analysis is supported by the fundamental backdrop of the U.S. economy, which continues to outperform the majority of its G10 rivals. After cutting interest rates three times in 2019, the Federal Reserve appears likely to remain on hold throughout the first half of 2020, while major peers such as the European Central Bank continue to push the envelope with non-traditional monetary policy.

The final factor that has me leaning toward a bullish outlook for the greenback in 2020 is the potential for the U.S. to open another front in the global trade war. Recent rhetoric and actions from the Trump Administration suggest that the self-proclaimed “Tariff Man” is increasingly dissatisfied with the state of trade between the U.S. and the European Union.

While the absolute amount of European imports with tariffs is low as of writing, we’ve seen tit-for-tat import tax hikes escalate rapidly, and with European manufacturers already struggling under the weight of a slowing domestic economy, not to mention the lingering uncertainty around Brexit, the eurozone is particularly vulnerable to a negative shock.

Since the Greek debt crisis nearly a decade ago, EUR/USD bears have been salivating over the potential for the single currency to fall to parity (1.00) against the greenback; from my perspective, it looks like the stage is set for 2020 to finally fulfill that desire.

However, given Gold thrives on uncertainty and is without any common-sense reason to be sold—especially with a major Stateside election in the balance come November—we’re forecasting the year’s Gold high at $1675. 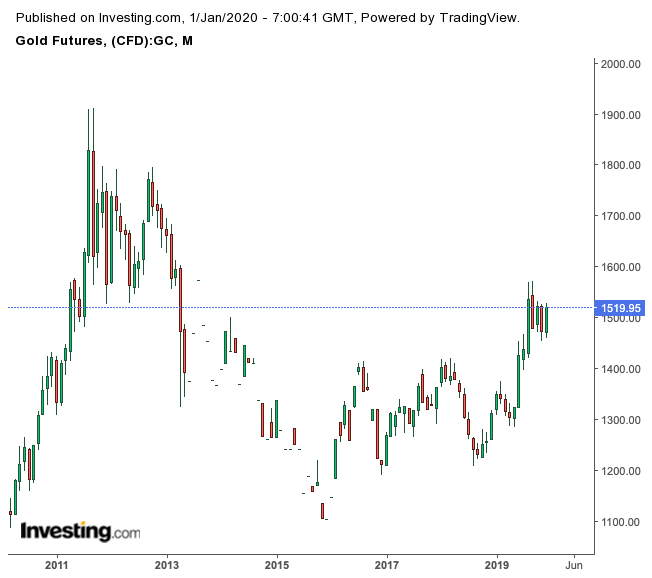 The S&P 500 shall be swung to-and-fro throughout the year by an ongoing injection of election projection. Our apolitically-objective view by simple mathematics is that the President will be re-elected as his voting base will again fully turn out plus some material percentage of the once “never-Trumpers.”

But the trade of the year is to sell the S&P going into Election Day, Nov. 3, even front-run it. The index is as excessively expensive as we’ve ever seen it, our 'live' P/E as of Dec. 31 is estimated to be around 25, the S&P itself year-to-date +28.88%, and more than one-third of the constituents not bettering their bottom lines in 2019. Therefore beware as the conservative wave crests and cascades, comes the confiscatory undertow.

Michele Schneider: Best Trades Could Be In Commodities

In 2019, the ratio between stocks and commodities hit a 100-year low. As we end 2019, the ratio has contracted some but can shrink much more in 2020. Since 1979, inflation has remained muted. Given statements by Steven Kaplan, the President of the Dallas Reserve, that interest rates will remain low and the future of the dollar as the world’s reserve currency is questionable, the best trades for 2020 could be in commodities.

Sugar futures, a secret barometer of inflation, has emerged from a base. Should spot sugar’s price rise above 13.75, it will clear a 2-year moving average. Another potential trade to track inflation is the silver-to-gold ratio.

Silver has underperformed gold for years. Should that ratio flip in silver’s favor, that too is not only bullish for the metals, but a great trade to use to take advantage of rising inflation.

Lance Roberts: Protect Capital From What Could Go Wrong

There was once a study done on the accuracy of “predictions.” The study took forecasts from a broad group that included everything from psychics to weathermen and came to two conclusions: weathermen are the most accurate predictors of the future and their projections are only accurate one out three days.

While trying to forecast what is going to happen in the financial markets over the coming year is always an annual event, these projections should be taken with a very high level of skepticism.

In our own portfolio management practice, we begin with the basic assumption that there is an 88% chance the market will finish the coming year at a level greater than where it started. Over the last 120-years, this is the percentage of positive versus negative markets. Starting with this basic assumption removes all the “guesswork” of what has to go “right,” leaving us to focus on the things that could potentially “upset the apple cart.” 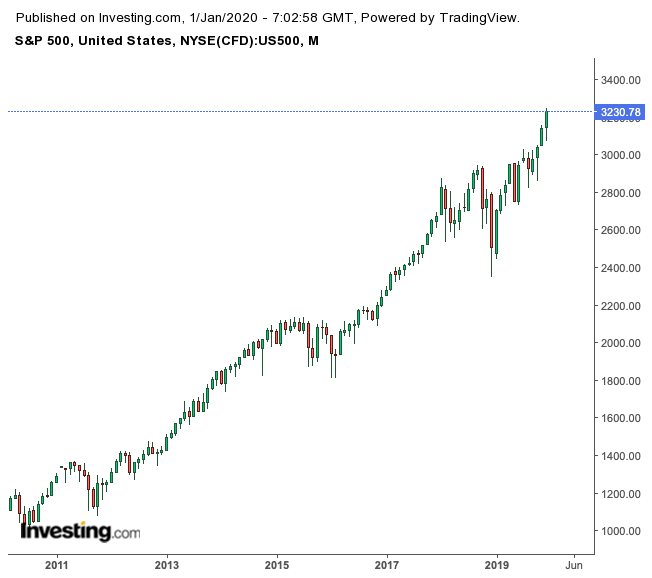 So, as we head into 2020, here is a short-list of possibilities we are either currently hedging portfolios against, or will potentially need to:

While some of these events are indeed outliers to the 2020 market and economy, no one expected housing prices to decline in 2008 or the dot-com bubble to bust in 2000.

As investors, it is never what could go right we need to worry about as we are already invested in the markets. From our perspective, focusing on how to protect our capital from what could go wrong makes much more sense.