One Way Or Another, U.S. Equity Markets In January Driven Mostly By China

One Way Or Another, U.S. Equity Markets In January Driven Mostly By China

China keeps driving U.S. markets, whether Donald Trump has a hand in it or not.

During the first month of 2020, stocks hit record highs in the days after the United States and China signed their long-awaited, endlessly negotiated, phase one trade deal on Jan. 15, which reduced tensions between the two countries. But the boost was short-lived.

In the latter half of the month, a virulent outbreak of the coronavirus, with its origins in the Chinese industrial city of Wuhan, has been crushing stock markets around the world. It's not yet clear how long it will take to contain the virus, which causes sometimes-fatal respiratory infections. More than 17,000 people, primarily in China, have been infected as of this writing, with 361 deaths thus far.

This may leave stocks struggling for direction for some time to come. The S&P 500 and the Dow Jones Industrials both saw solid monthly gains of 3.3% or so disappear entirely. The two indices ended the month with their first January losses since 2016. 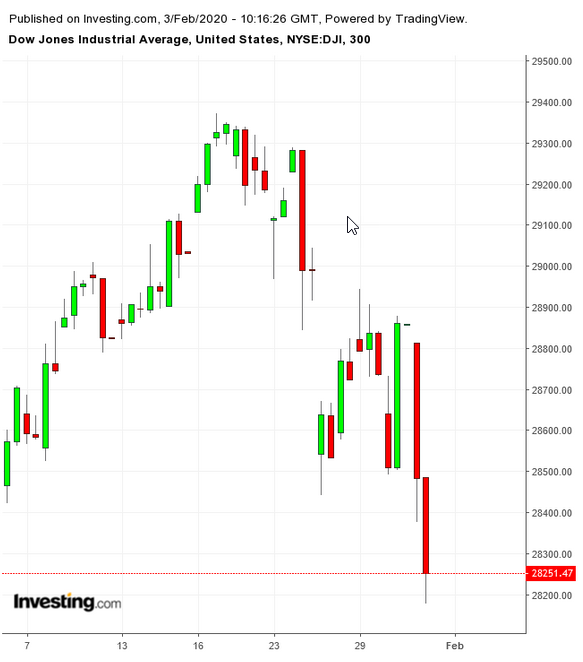 If January's volatility was a surprise to many, the reason for it was an even bigger surprise. The Chinese government was slow to acknowledge the virus. But the decision to shut down all public transportation into and out of Wuhan on Jan. 23 was a huge wakeup call to both Chinese and global markets.

The Dow fell 219 points early in the day before recovering. However, the following day, the blue-chip index dropped 170 points and then 454 points on Jan. 27.

As the news worsened, on Friday, American Airlines (NASDAQ:AAL) immediately suspended flights to and from mainland China. Beginning Thursday, Feb. 6, both Delta Air Lines (NYSE:DAL) and United Airlines (NASDAQ:UAL) will suspend all their flights to the area as well, with Delta announcing the service interruption would last until Apr. 30, while United and American say they will resume service on March 28, though each airline also says they'll continue to monitor the situation for additional developments. Shares fell 6.4%, 4.7% and 15% respectively for the month. 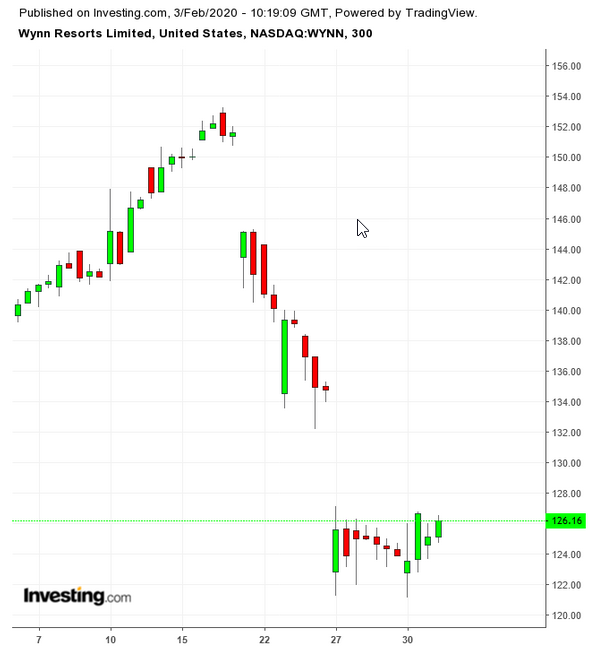 Shares of casino operator Wynn Resorts (NASDAQ:WYNN), which has a huge investment in the casino business in Macau, fell 9.2% after rising nearly 15% in December.

Most of InterContinental's 10.6% share decline in January occurred during the latter half of the month. Hyatt fell 5.8%.

Disney (NYSE:DIS) has shut its two theme parks in the greater China region—Disneyland Hong Kong and Shanghai Disney Resort. Shares of the entertainment giant fell 4.4% on the month.

On the other hand, shares of Lakeland Industries (NASDAQ:LAKE), which makes safety garments for industrial situations, jumped nearly 51% in a week as investors speculated there would be demand for the company's products. Alpha Pro Tech (NYSE:APT), which produces face masks and other protective gear, saw its stock jump 95%.

Volatility Not Just Driven By China

Still, the market's January gyrations weren't entirely due to the coronavirus. Many U.S. stocks, especially technology shares, rose to overbought levels in the fall of 2019, with the buying continuing into January. The epidemic either forced people to sell and get out of the market or lock in profits quickly.

During January, both Alphabet (NASDAQ:GOOGL) and Amazon (NASDAQ:AMZN) achieved market capitalizations of $1 trillion. Friday's selloff, however, pushed both companies' valuations back to just below the trillion-dollar level.

Interestingly, the outlier in all of this is electric-vehicle maker Tesla (NASDAQ:TSLA), which last week reported better than expected fourth-quarter results. The company's shares finished the month up a whopping 55.5%, besting the 26% gain in the fourth quarter. The shares are now selling at 48 times projected 2020 earnings.

Another winner in January, for reasons wholly unrelated to geopolitical events, was Beyond Meat (NASDAQ:BYND), the maker of plant-based meat-like burgers. 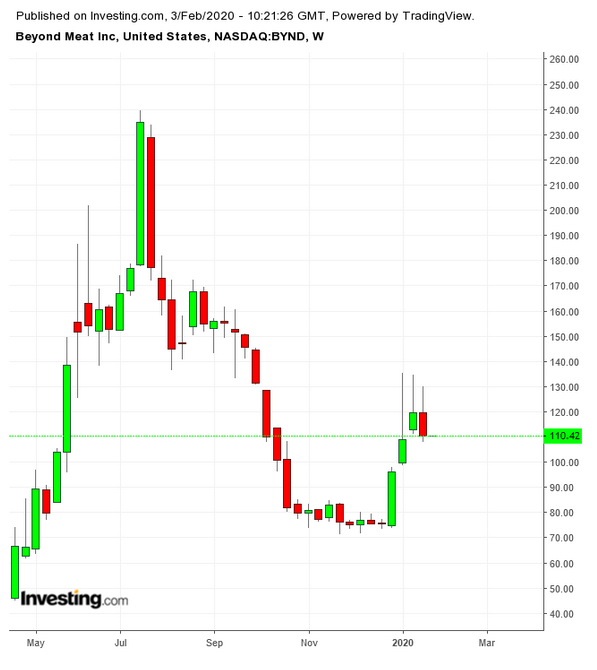 Shares, which had fallen percipitously from their 52-week high of $239.71, hit during the summer of 2019, jumped 48%. Two reasons for the move: restaurant chain Denny's will expand its trial of BYND's products from just within the Los Angeles area to 1,700 restaurants, and McDonald's will roll out a trial of the burgers into its Canadian outlets. That said, the stock has been hit by sell calls from analysts who believe the shares are wildly overvalued.

Homebuilders were among the strongest market performers in January, on hopes for a decent domestic economy (and little direct effect from the coronavirus). Strong demand especially from affluent buyers and ultra-low interest rates likely triggered the moves. Lennar (NYSE:LEN), PulteGroup (NYSE:PHM) and DR Horton (NYSE:DHI) were among the top six S&P 500 performers in January, up 21.5%, 20.7% and 16.4%, respectively.

There was some considerable sector weakness during the month as well.

The number of oil and gas rigs operating in the United States has fallen 26% since 2018, down by more than half since 2008.

Exxon Mobil (NYSE:XOM) and Chevron Corp (NYSE:CVX) were among the weakest Dow stocks on for the month, down 7.4% and 7.8%, respectively. Oil services giant Schlumberger (NYSE:SLB) dropped 16.6%. Oil-and-gas production companies saw their shares fall 15% or more. Noble Energy (NASDAQ:NBL) fell about 20%.

Traditional retailers also struggled against the competition from online retailers, especially Amazon. Macy's (NYSE:M) fell 6.2% for the month after a 10.9% rally in December. Target (NYSE:TGT) tumbled 13.6% after a 25% gain the month before.

Looking forward requires some perspective. A good piece of 2019's equity market rally was a rebound off the fourth-quarter 2018 selloff. That catalyst is gone now.

Plus, China is still trying to contain the coronavirus. If it can't be brought under control quickly, investors may increase their rush to safety—including gold or Treasurys. Equally important is the market's continuing vulnerability to a sell-off driven strictly by high prices, particularly among costly big tech stocks that grab the most investor attention.

Nonetheless, the economic background, remains favorable. Europe looks at least stable, though there will likely be tensions as the continent and post-Brexit Britain learn to deal with each other.

The U.S. economy is growing, albeit modestly, with record-low unemployment. And there has been some wage growth. Plus, there's a sizable bet on the idea that interest rates won't rise.

That's good for buying big-ticket times like cars and trucks and homes. And of course, Trump doesn't want a recession either.