A strong and impressive rally in NVIDIA (NASDAQ:NVDA) shares during the current global health crisis clearly separates this chip stock from the crowd. While other players saw their share prices tumble on demand concerns, NVIDIA's stock surged more than 50% this year, hugely outperforming the Philadelphia Semiconductor Index which is down about 6% since the start of 2020. 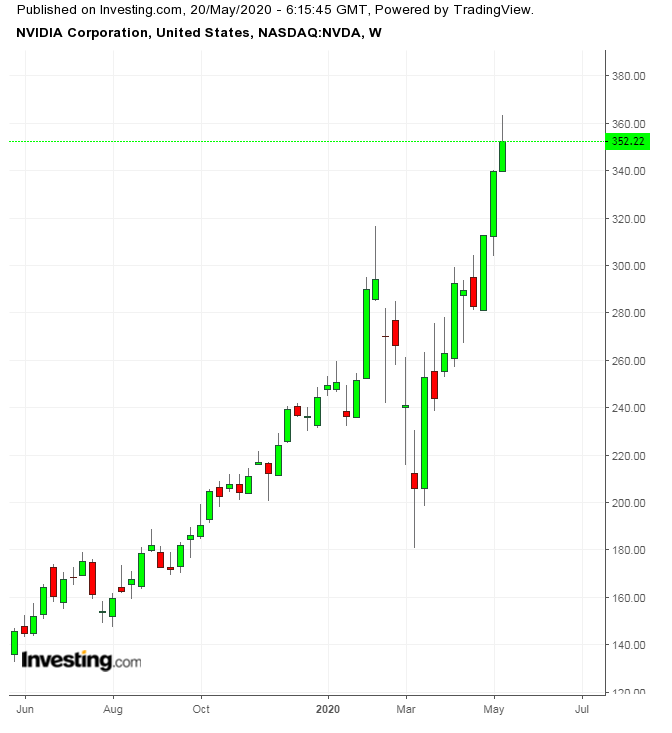 While the chipmaker is unlikely to escape the overall demand slowdown due to COVID-19 closures, analysts are focusing on the company’s balance sheet, cash flow, and product categories, each of which is expected to remain strong in the current environment.

NVIDIA was one of Morgan Stanley's top picks in the semiconductor space. “For larger cap growth with the best chance of powering through tough conditions, we favor NVIDIA,” wrote analyst Joseph Moore in a recent note.

When the Santa Clara, CA-based company releases its first-quarter earnings tomorrow, investors will be keen to see whether the company’s demand recovery is on track.

NVIDIA has seen inventory levels build and buyers delay purchases since Q4 2018. The company’s revenue stream has been hit hard by the industry-wide slowdown, particularly in demand for chips used in gaming and data-centers—NVIDIA's two largest revenue-generating units.

But 2020 is all about growth for NVIDIA. In February, the company provided a strong revenue forecast for Q1, saying sales will be $3 billion, plus or minus 2%. The chipmaker later trimmed that forecast by just $100 million due to the coronavirus-related disruptions.

Still, NVIDIA didn't passively accept that news. The biggest maker of graphics chips used in gaming on personal computers, has adapted its technology for the Artificial Intelligence market, creating a new multibillion-dollar business.

According to Chief Executive Officer Jensen Huang, the use of such computing is spreading, making growth less reliant on the spending plans of a handful of companies.

The majority of the company’s sales still comes from PC gaming, where NVIDIA’s graphics chips create the most realistic experiences. Top-of-the-line GeForce parts cost more than many consumers spend on a whole PC.

As signs appear of a strong rebound in the demand for NVIDIA chips, the key question for investors is just how far chipmaker stocks can go.

Most analysts expect semiconductor business to improve in 2020, when the sector is anticipated to get a significant boost from the introduction of 5G technology and the expansion of cloud infrastructure spending.

But a variety of headwinds remain: valuations are creating a major cause for concern, especially when taking into account risks such as COVID-19 which is currently ravaging the world’s economy. As well, U.S.-China ties are once again worsening.

The Trump administration last week barred any chipmaker using American equipment from supplying China’s Huawei Technologies without U.S. government approval. The Chinese government has vowed to protect its national champion, with threats of retribution against U.S. companies that depend on China.

NVIDIA has invested heavily in the world's second largest economy, where many of its chips are used for assembly into other products, especially in industries related to artificial intelligence.

After the stock's powerful rise this year, NVIDIA is now one of the most richly valued chip stocks with a price-to-earnings ratio of 77.41, fetching more than twice the semiconductor group’s average multiple of 38.35. That makes the stock susceptible to correction on any negative surprise in tomorrow’s earnings report, especially when the economic and geopolitical environment remains fragile.