From Kuala Lumpur To Oklahoma, Oil’s Bloodbath May Spare Few

From Kuala Lumpur To Oklahoma, Oil’s Bloodbath May Spare Few

Malaysia’s new ruling party has just announced its cabinet and might face a vote of no-confidence in two months. But Prime Minister Muhyiddin Yassin has bigger worries before that: an annual 45% drop in oil prices spells serious financial trouble for the nation of 32 million.

While those anxieties have been there for the better part of the last decade, what’s different is the threats are a lot worse this time from the added layer of uncertainty posed by the coronavirus epidemic.

“It’s the perfect storm for oil that no one could have imagined — an OPEC bust-up, followed by a Saudi-Russian fight for market share and city lockdowns in Italy and elsewhere from the coronavirus,” said John Kilduff, founding partner at New York energy hedge fund Again Capital.

And as the popular saying goes, it might get worse before it gets better.

But how much worse is worse? Well, Goldman Sachs, Wall Street’s leading voice in energy trading, is predicting oil prices as low as $20 per barrel. That’s a level unseen in 18 years. U.S. crude bottomed on Monday at $27.34 on the heels of the Goldman call, while Brent struck a trough of $31.02. Those were only four-year lows though, leaving room for a lot more demand destruction. 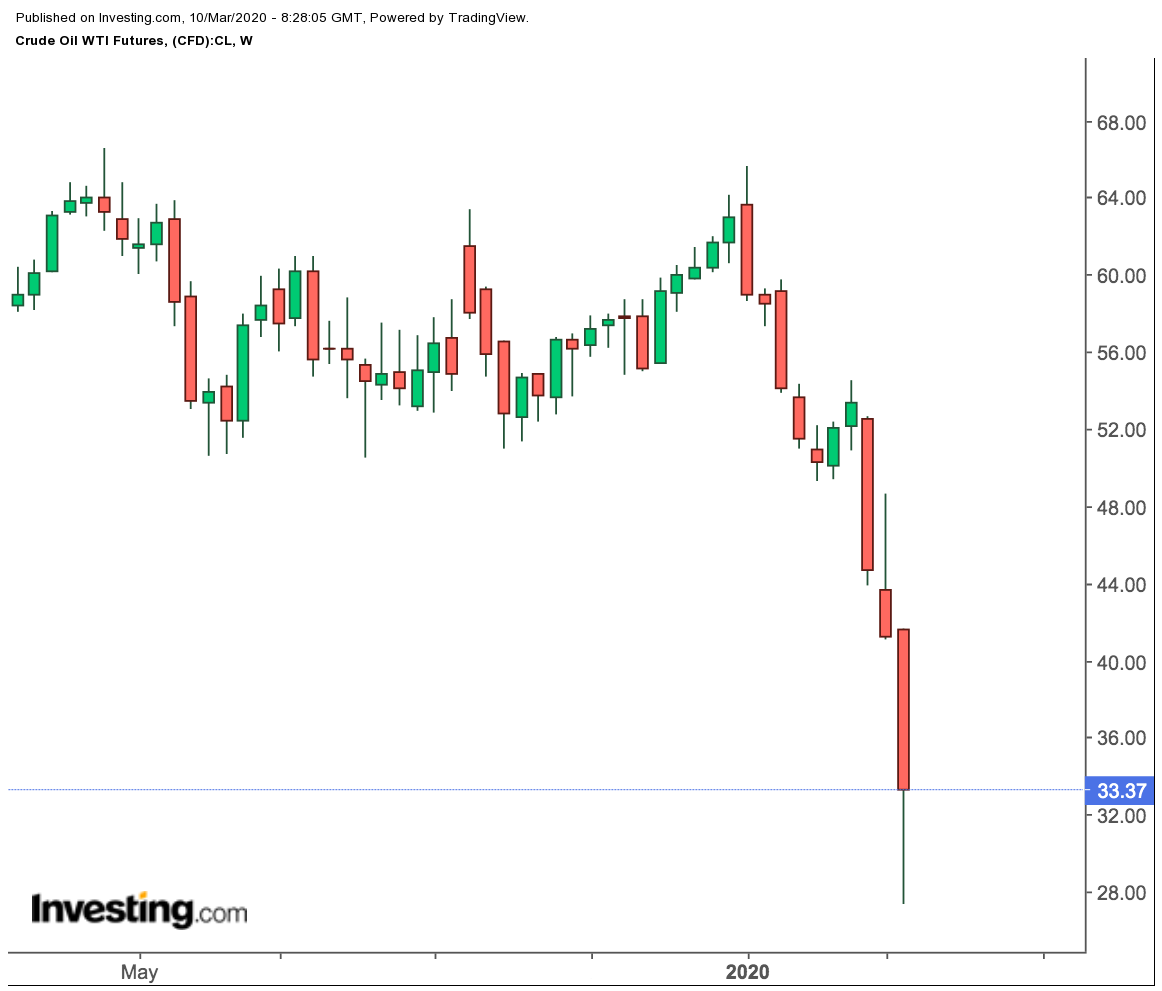 While it’s debatable how long the Saudi and Russian economies themselves can weather these prices — the popular theory is Riyadh needs $80 oil and Moscow at least $40 per barrel to balance their budgets — such ultra-low yields from crude could kill the most politically vulnerable states and debt-strapped companies within months.

In Malaysia’s case, for instance, it’s been estimated that every dollar lost on a barrel would knock off up to 300 million ringgit ($71 million) from the federal budget.

Lower oil and gas prices had already resulted in slower mining and quarrying sector contribution to Malaysia last year, partly contributed to the more moderate GDP growth of 4.3% in 4Q19 year-on-year versus 4.7% in the year-ago corresponding period.

In Kuala Lumpur, the previous administration budgeted for oil at $62 per barrel in 2020 — just about the point where Brent closed 2019. 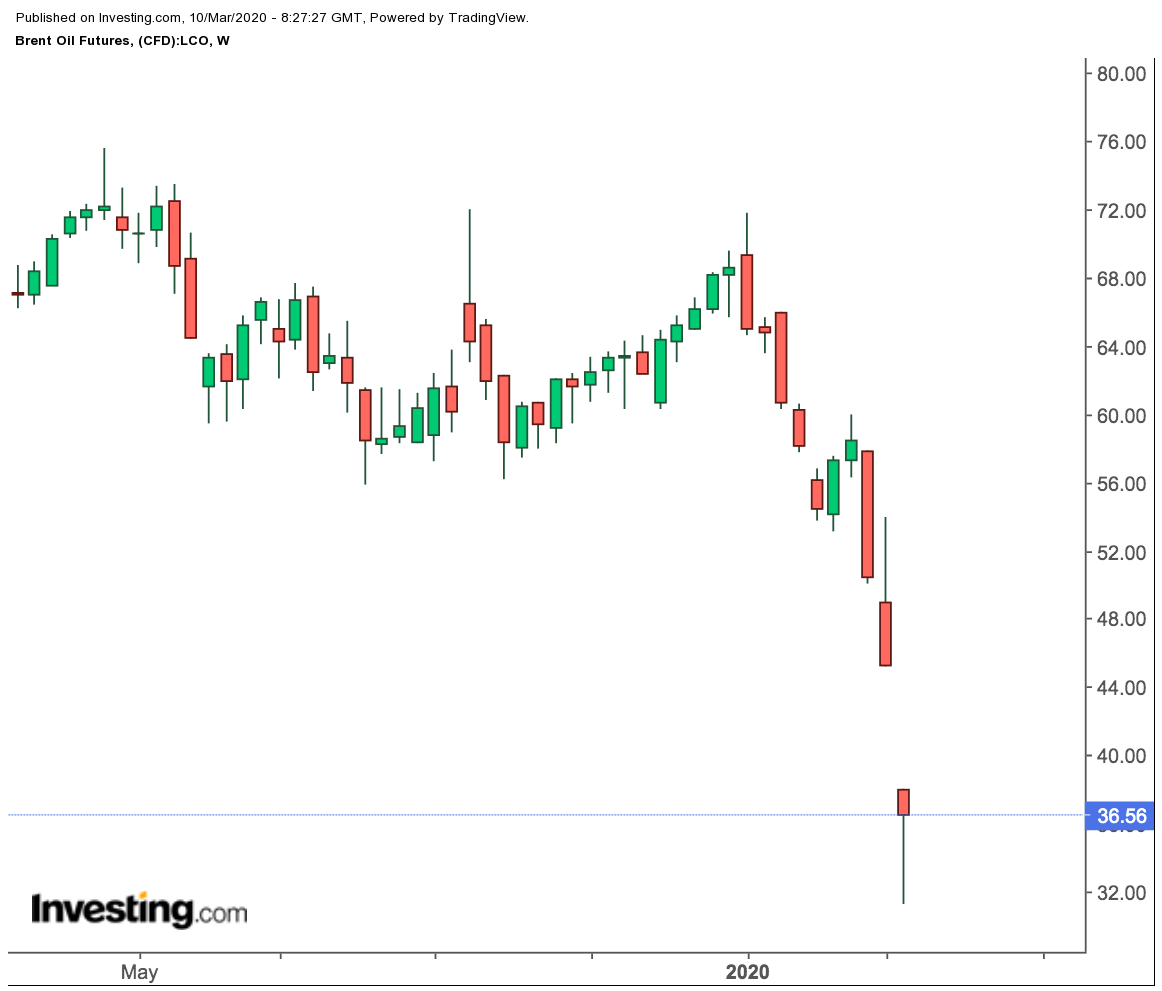 “The newly formed government will likely revise the Budget 2020 and we may see a reduction in government expenditure and investment,” local bank MIDF Amanah Investment said in a research note, anticipating the path ahead for Muhyiddin’s administration.

Still, Malaysia is in a much better state than economies like Nigeria, Libya and Iran.

Before this year’s meltdown in oil, Nigeria's parliament passed a record 10.59 trillion naira ($35bn) budget for 2020, paving the way for what it hoped would be a return to the international debt market to shake off the impact of a recession. Such aspirations can be forgotten for now.

In Libya, the head of Libya's internationally recognized government, Fayez al-Sarraj, warned as early as a month ago of a looming financial crisis and budget crisis from a blockade of oil terminals and fields by groups loyal to renegade general Khalifa Haftar.

"Losses from the oil shutdowns have exceeded $1.4bn,” al-Sarraj said. “The figure is increasing every day."

In Iran, the government of President Hassan Rouhani appears set to face a fourth crisis this year alone from the oil price crash, after earlier disruptions caused by civil unrest, U.S. sanctions on its crude exports and a major outbreak of coronavirus infections.

In the United States, energy company and related services bankruptcies that were estimated to rise in 2020 will likely accelerate a few notches at least with the oil price crash, Forbes reported on Tuesday.

Quoting data from the Haynes and Boone’s Oilfield Services Bankruptcy Tracker, Forbes said there were six new bankruptcies in the oilfield services area in Q4 2019. So far in 2020, Pioneer Energy Services (OTC: PESX) has been the only major oilfield services company to enter Chapter 11 bankruptcy, it added.

In Monday’s market rout, ExxonMobil (NYSE:XOM) and Chevron (NYSE:CVX), two of the world’s biggest oil companies that have also expanded deeply into the U.S. shale patch, saw their shares drop 12% and 15%, respectively.

But shares of medium-to-smaller sized U.S. shale drillers, especially those that carry heavy debt and earn just a fraction of what the multinationals do, took a real socking.

Parsley Energy said it has slashed its 2020 free-cash-flow outlook to at least $85 million, from a prior view of at least $200 million and announced a general activity slowdown as well.

EOG Resources also plans to curb spending to protect return to its shareholder dividend and will release details later.

“Some shale producers will bounce back from this, and some may even end up winning more market share,” said Fred Kempe, chief executive and president of the Atlantic Council, a Washington-based think-tank.

“But they're all going to lose revenue. That's what every one of these oil price wars has shown. You can win some market share, but you're going to lose more on the revenue side over time.”