Be the first to comment
The U.S. dollar traded higher on the back of the Federal Reserve’s monetary policy announcement. Although the main takeaway from today’s FOMC meeting is no rate hikes for the next three years, the greenback strengthened, just like it did after Jackson Hoke because none of this was a surprise. As expected, the Federal Reserve left monetary policy unchanged and pledged to keep interest rates on hold until they achieve maximum employment. However, the vote was not unanimous, with two out of nine policy-makers dissenting. Robert Kaplan wanted “greater policy flexibility” once employment and inflation goals are reached, while Neel Kashkari wanted stronger forward guidance to signal no hikes until inflation is sustained at 2%. The dot plot shows 13 out of 17 policy-makers projecting rates on hold through 2023 with one member seeing a rate hike in 2022 and three seeing rates above zero in 2023. The central bank does not expect inflation to exceed target until 2023. According to Fed Chairman Jerome Powell, important statement changes were made today to clarify the Fed's long-term commitment to low rates. He also stressed the need for fiscal support because without it, the economy would face downside risks.
Consumer spending was weaker than expected, rising only 0.6% in the month of August but, once again, the impact on the dollar was limited. Economists were hoping for a 1% increase, but Americans are feeling the sting of expired unemployment benefits. Although President Donald Trump signed an executive order to continue paying $300 a week in jobless benefits, some states like New York are only offering three weeks of back payments for August that could be extended to five weeks and, at most, six weeks. At some point the money will run out. And even though stocks are roaring, the economy is not, which means spending could slow further in the coming months. However, for the time being, investors are pleased with the central bank’s commitment to low interest rates and with the prospect of a vaccine later this this year. The first supplies of a vaccine, which could go out within 24 hours after regulators approve its usage, will go to essential workers and those in need. According to the CDC, a vaccine could be available to all Americans as early as Q2 or Q3 of 2021. Good news like this has kept the dollar bid despite the Fed’s dovish interest rate outlook. Improvements are also expected in tomorrow’s Philadelphia Fed survey and housing market reports.
There are two more monetary policy announcements this week – tonight’s Bank of Japan meeting and tomorrow’s Bank of England meeting. No changes are expected from either, but guidance is key, just like the Fed. Between the two, Japan’s policy meeting will be less market-moving. With recent data improvements there’s less urgency to increase stimulus, and with a new prime minister, other priorities are at hand. In the UK, there’s been slightly more weakness than strength since the August meeting. Retail sales growth slowed, consumer price growth eased to a five-year low while wages fell. Improvements were seen in the manufacturing and service sector, but with Britain looking to override parts of the withdrawal agreement, uncertainty is high. Monetary policy committee members voted 9-0 to leave policy unchanged but raised their growth forecast. However, earlier this month, comments from BoE Governor Andrew Bailey were less upbeat. He described the consumer spending picture as uneven and offset by weak investment. MPC member Dave Ramsden said the central bank can step up QE pace significantly if needed, while Michael Saunders said its likely additional easing will be appropriate. It will be interesting to see if Bailey shares these views and whether one or two policy-makers like Saunders votes in favor of easier monetary policy. If they do, sterling will give up its gains quickly.
The Australian and New Zealand dollars will also be in focus with New Zealand Q2 GDP and Australian labor market numbers on the calendar. An improvement in leading indicators did not help AUD, which lagged behind due in part to expectations for weaker labor market conditions. According to the PMIs, labor market conditions in the service and manufacturing deteriorated last month. The New Zealand dollar rose for the fourth day in a row, but the second quarter was tough for all countries and New Zealand is no exception. So while Q2 GDP growth is expected to fall 12.5%, traders have largely shrugged off the weakness because they were one of the first countries to reopen. While some restrictions returned, life in New Zealand is closer to normal than most other nations. The Canadian dollar traded higher against the greenback despite weaker inflation data after the U.S. dropped tariffs on aluminum imports right before Canada was set to retaliate. 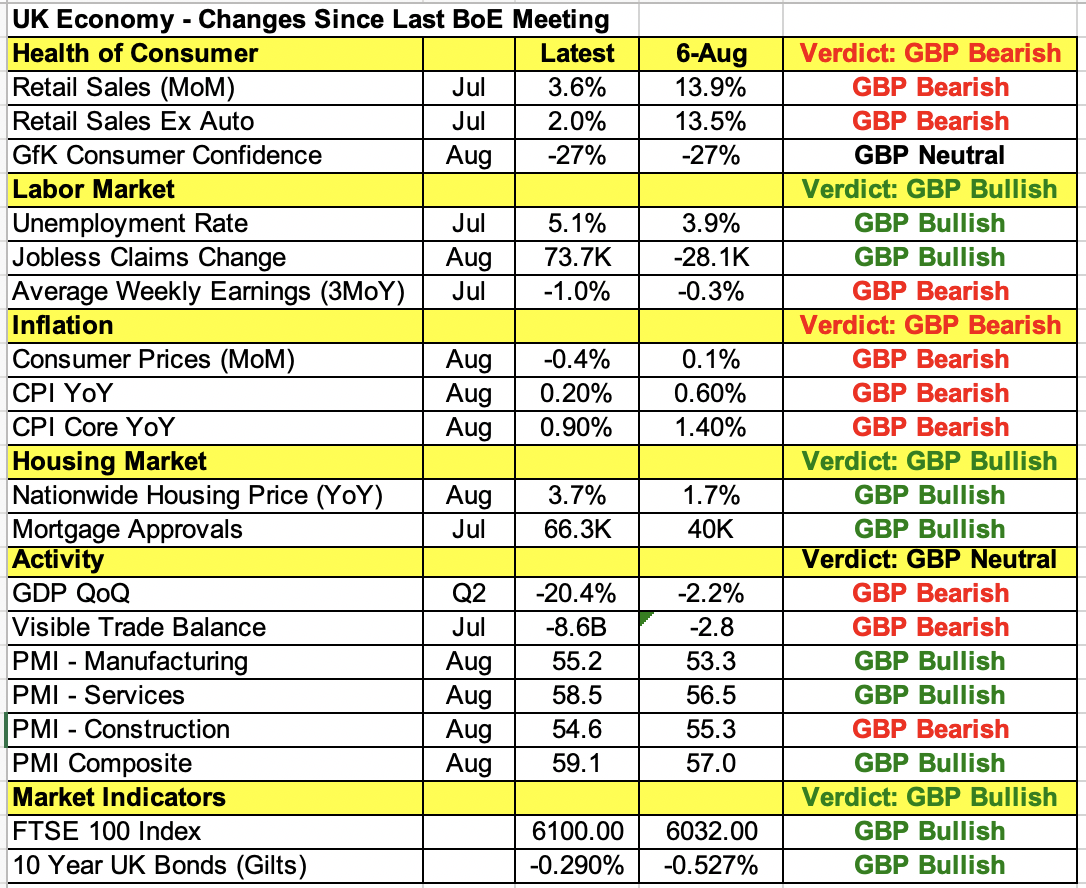