Forget oil. The oft-used refrain that “it’ll probably get worse before it gets better” has suddenly taken on a very frightening meaning for markets and investors of most stripes and size.

But what else can we expect when the Federal Reserve drops rates to near zero in the second emergency cut in two weeks and stands by with another $700 billion to pump, and the best market reaction is “duh.” 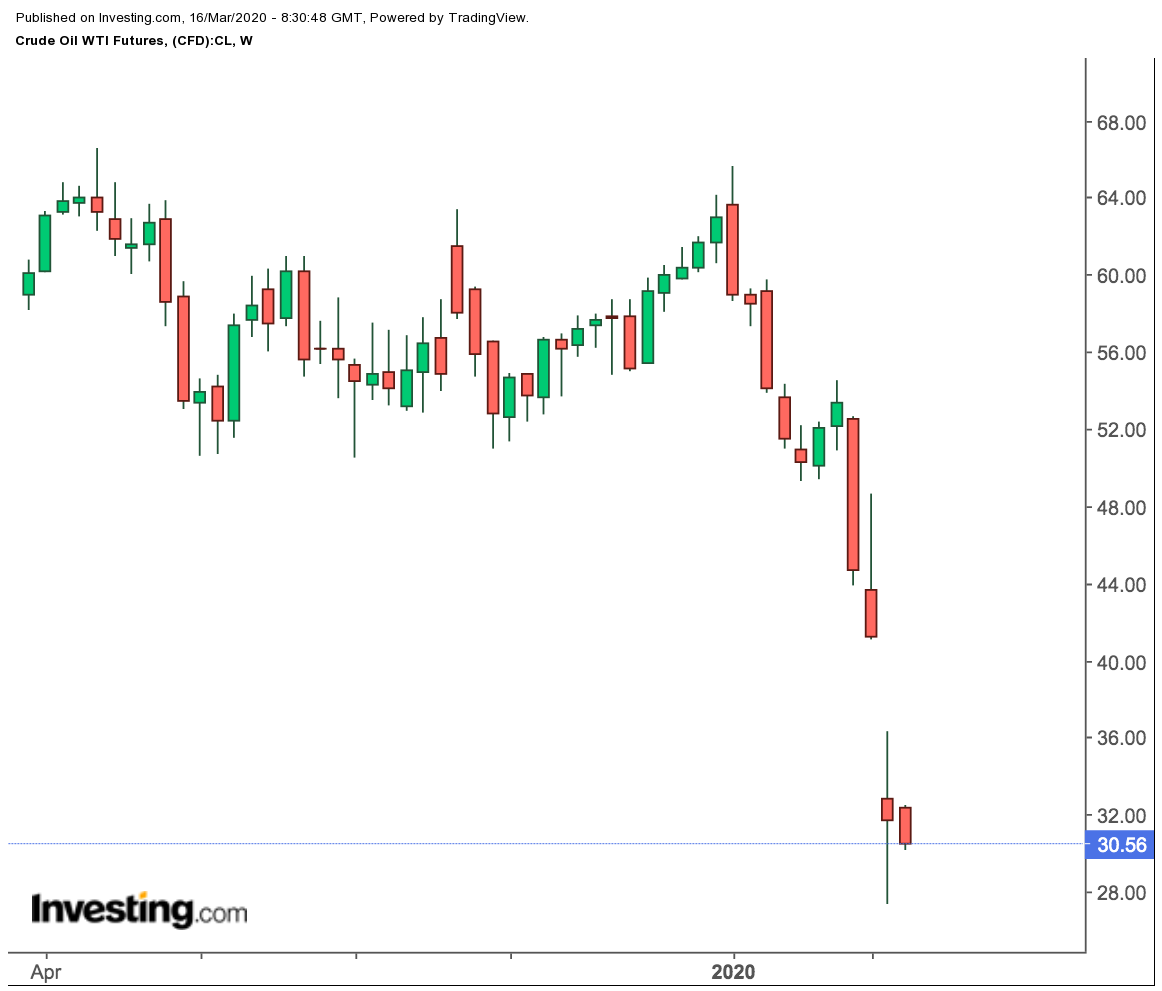 With coronavirus hysteria already forcing 100,000 million Europeans into lockdown and Americans shuddering that they’ll be next, the global economy has been upended in ways few central banks could have imagined.

In the absence of people being out, working, driving, eating, drinking and buying things as they normally do, no amount of rate cuts or stimulus is likely to do the trick of restoring real demand or consumer sentiment.

This is especially so in the United States, where almost 80% of the economy is driven by consumer spending. Unless the-powers-that-be find a way to put money directly into the pockets of ordinary people with shrunken or missing paychecks, so that they can spend online what they’d usually spend in physical stores, things will get worse.

With Nike (NYSE:NKE), Urban Outfitters (NASDAQ:URBN) and 14 other major retailers temporarily closing stores and Walmart (NYSE:WMT) and Apple (NASDAQ:AAPL) cutting hours, we can forget for now any hopes of things getting “better.”

That’s why Dow futures are indicating another 1,000-point or near 5% loss at Monday’s open. It’s a damning verdict that the Fed action on Sunday meant nothing to Wall Street, even if it received rare praise from U.S. President Donald Trump, who has persistently badgered the central bank to cut rates to zero since he took office.

In oil’s case, U.S. crude and Brent futures were down about 2% or more by Monday noon in Asia, reversing course after Friday’s rebound inspired by Trump’s pledge to fill up the U.S. petroleum reserve — a throw-away to the shale oil industry that, as expected, couldn’t last beyond a session. 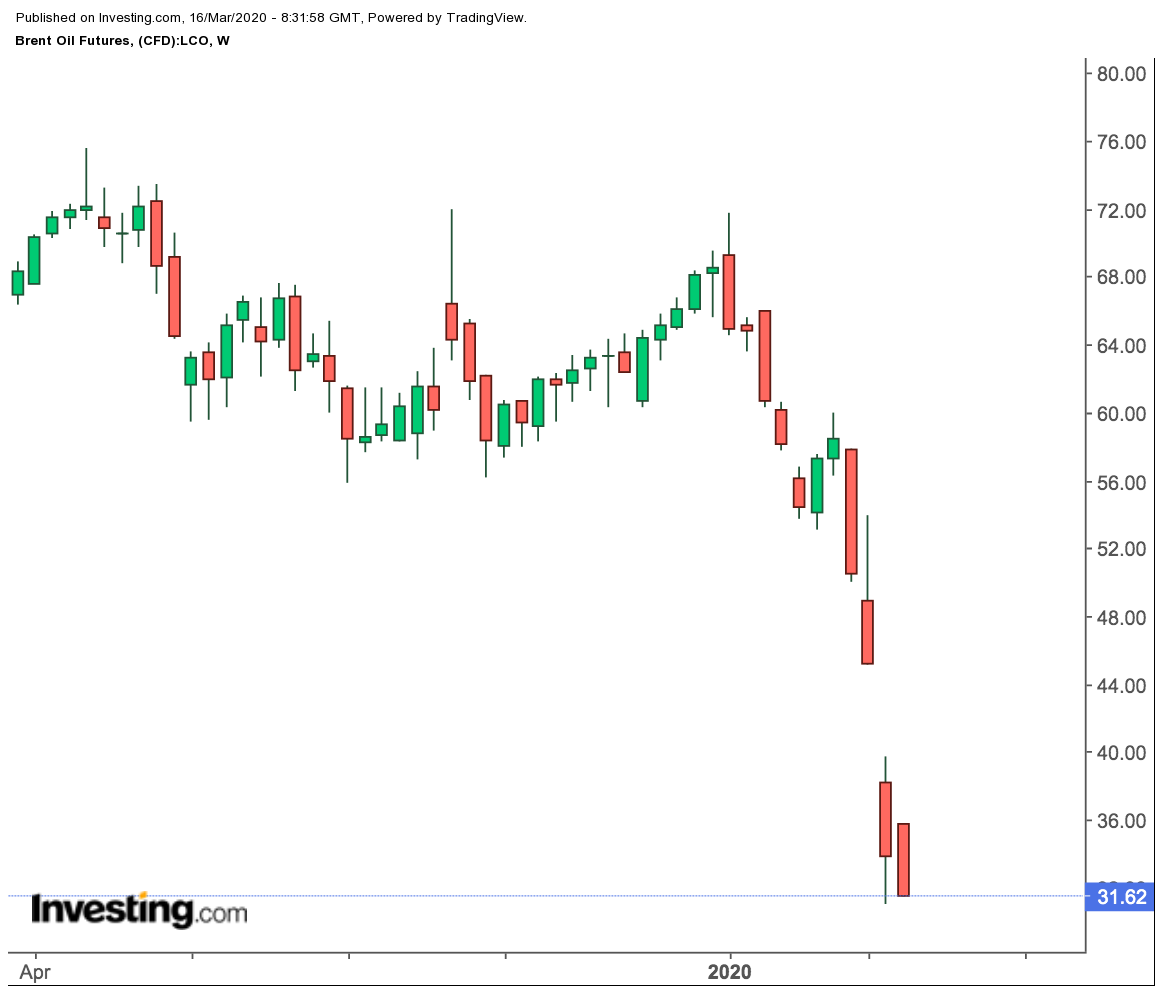 Even the spot price of gold got a bump of less than 2% after the historic rate cut — not quite living up to its safe-haven tag, which has been on the decline anyway, especially after last week’s loss of 9%, its most for a week since 2011.

“A best-case scenario is that containment efforts bear fruit and in three months’ time, the world sees the light at the end of the tunnel and recovery begins. That is the optimistic scenario though with some significant countries in the world still dilly dallying, or in a state of denial. You know who you are.”

For oil, that could mean Goldman’s $20 call for a barrel becomes a more distinct possibility. While both WTI and Brent remain above $30 now, it’s not too hard to see them losing another third of their value.

A serious oversupply risk is looming over oil as the coronavirus induced clampdown on air, road and sea travel intersects with Saudi Arabia’s ill-timed production cuts.

Carriers like American Airlines (NASDAQ:AAL) have slashed as much as 75% of their international capacity after Trump announced a complete ban on European travelers into the U.S., while EU members took individual measures to secure their borders. As of last week, consultancy Rystad Energy saw global air traffic plunging 16% or more in 2020, resulting in a loss of around 780,000 bpd in jet fuel demand.

The average price for a gallon of gasoline in the U.S. was at $2.26 as of Saturday, the lowest since 2017, according to the American Automobile Association. While lower fuel prices typically stir economic growth, the current drop comes when fewer Americans are driving, due to disruptions caused by the pandemic, which has already infected more than 3,700 people and killed about 70 in the country.

But what about Trump’s plans to top up the U.S. SPR, or Strategic Petroleum Reserve? Won’t that help the shale oil industry?

As Forbes energy contributor Scott Carpenter puts it, Trump’s plan to fill up the SPR might prove “more effective as a metaphor for the shale sector’s bottomless appetite for debt,” rather than a meaningful catalyst for a crude price hike.

That's because the SPR’s total capacity is 713.5 million barrels. As of last week, the total volume of crude in the underground salt caverns of Louisiana, which account for the nation’s reserves, stood at just under 650 million barrels.

So, the maximum that Trump can dump into those caverns is 63.5 million barrels. Even if the administration continues filling the SPR through the year-end, it will only be able to do up to 219,000 barrels per day over the remaining 290 days of the year beginning March 16.

“That is equivalent to not even half the size of the cuts which OPEC+ had been considering before recent talks fell apart. And it is only a fraction of the roughly 4 million barrels a day of oversupply that global markets might now face,” Carpenter says, referring to the aggressive Saudi production plan in coming weeks, which is expected to be matched somewhat by  Russian output.

And despite their bravado, the Saudis seem to be in trouble too.

Aramco (SE:2222), Riyadh’s state-owned oil company, is slashing planned spending this year in the first sign that plunging demand and the crude-price war the kingdom has unleashed are hitting home, Bloomberg reports.

Capital expenditure will be between $25 billion and $30 billion in 2020 and spending plans for next year and beyond are being reviewed, Aramco said. The oil giant is lowering that range from the planned $35 billion to $40 billion announced in its IPO prospectus. It spent $32.8 billion in 2019.

Either Way, Gold Will Get Sold

In gold’s case, expect any rebound to be limited with players likely to sell quickly to cover margins and other losses on stocks and elsewhere. As OANDA’s Halley puts it, if equities drop further, liquidation of gold longs seem inevitable; if equities rise again toward $1,600, or even reprise the $1,700 highs of last week, it will get sold in double quick time. 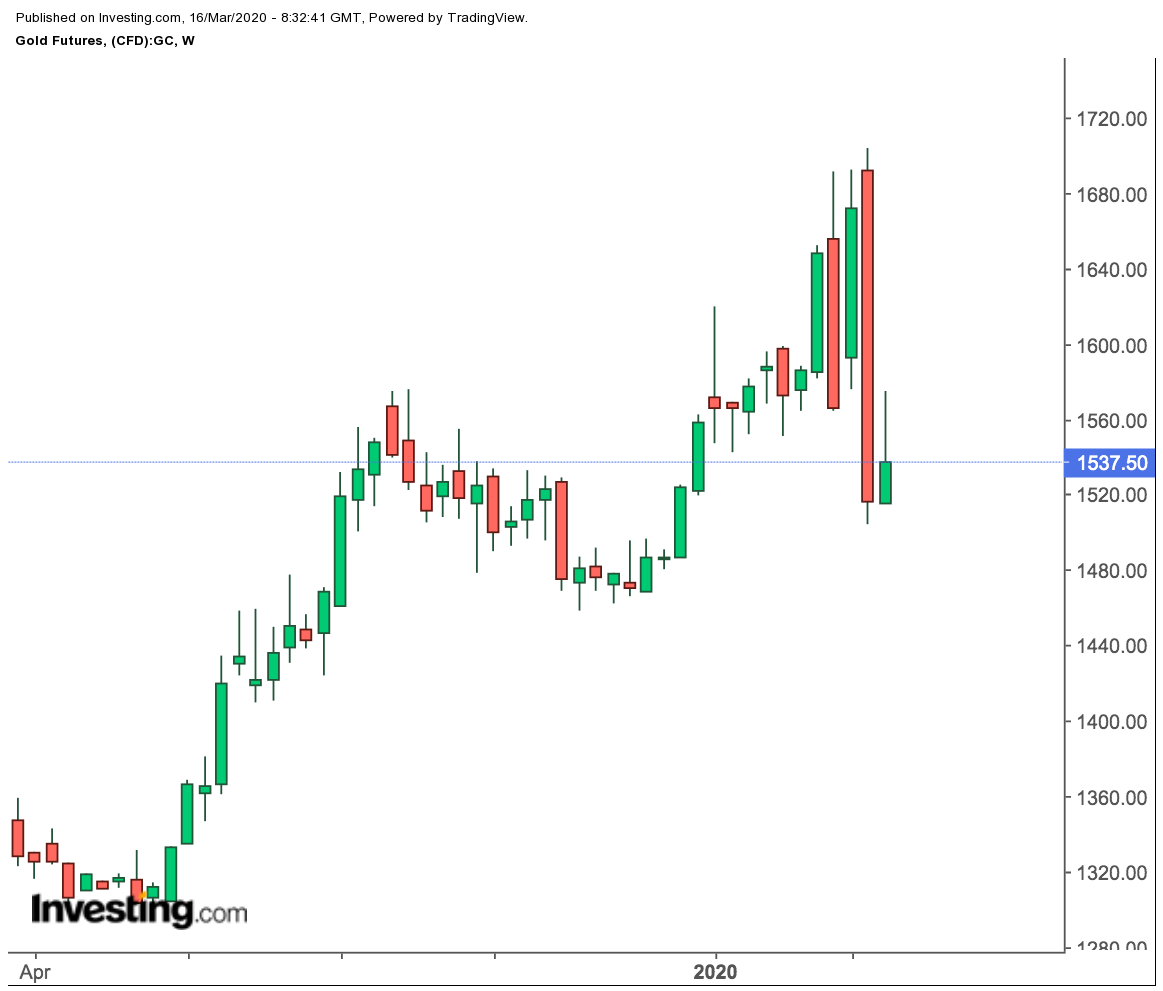 “In all likelihood, patience will reward gold longs, but deep pockets will be required,” he said.

“Having fallen $175 in the past week, more downside pain cannot be discounted, and nor will technical levels be respected. That said, the $1,460.00 to $1,480.00 region looms as longer-term support. If one was looking to go long and close their eyes, that could be as good a region to do so as any.”