At $40 per barrel, theoretically only half of the Saudi budget will be funded by its oil and that won’t do for the kingdom. So, the House of Saud is doing what’s logical: pumping up the price on its end, to force a premium through the rest of the market.

In doing this, the Saudis are betting on two things.

The first is that their oil customers—led by No. 1 buyer China—will be willing to pay a higher price for crude, as economic activity picks up with the world reopening from COVID-19 lockdowns.

The other is that lower U.S. production of light oil since the pandemic will allow the Saudis to expand market share for their competing Arab Light crude in Asia, despite selling it at a higher price. Sales of flagship Arab Light to Asia account for more than half of total Saudi oil exports. 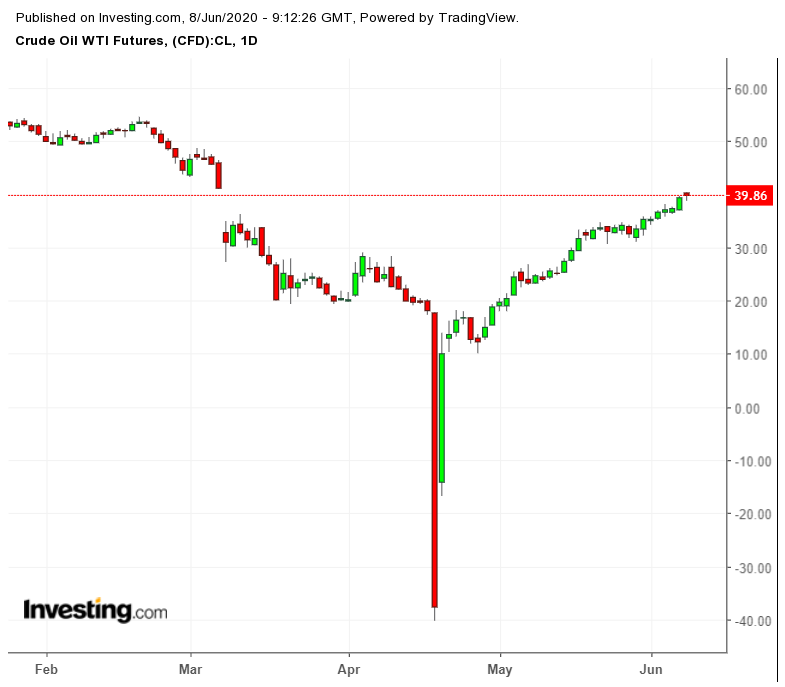 Reasons For Change In Saudi Psyche

There are other reasons as well for the change in the Saudi psyche. One was Saturday’s OPEC meeting led by the kingdom, which extended the group's commitment to cut 9.7 million barrels per day from global oil output to July. Also, for the first time in years, the meeting proceeded without dissent against the Saudi leadership, despite Riyadh wagging an admonishing finger at production-quota “cheaters” within the group.

With all this, Riyadh is pushing the envelope now on higher prices, trying to get to $50 per barrel, or as close as possible to the $80-and-above mark needed to balance the budget. They might continue making progress with Brent, the global crude benchmark. 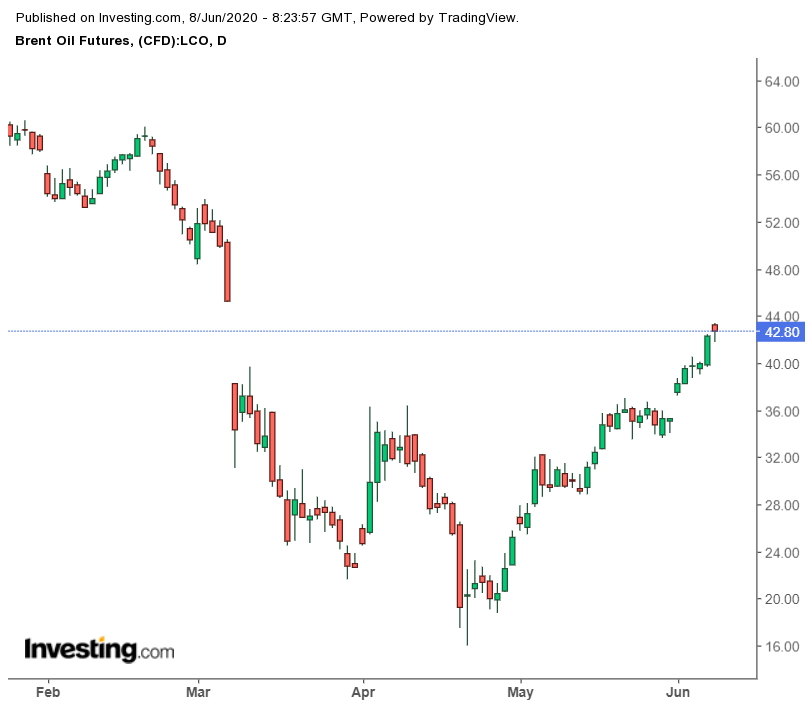 But with U.S. WTI, it could be a different story.

We’ll get to the dynamics of U.S. crude later and why it could defy the Saudi plan. But first, let’s explore Riyadh’s audacious decision to raise the Official Selling Prices, or OSPs, for its Arab Light and why the Saudis are so confident moving in that direction, just weeks after lockdowns began easing across the world.

“With China’s demand for crude now rising, the Saudis are raising prices,” Bloomberg said at the weekend.

“Buyers in the U.S., the Mediterranean region and Northwest Europe will also pay more for oil.”

Breaking down the new OSPs for Arab Light, Bloomberg reported that the July selling price for the blend to Asia was now $6.10 a barrel above June, marking the largest increase in at least 20 years.

Riyadh also raised the Asian pricing for other grades by between $5.60 and $7.30 a barrel. A Bloomberg survey of eight traders and refiners had an expected increase of about $4 a barrel. The new rates are expected to guide pricing for Brent this week.

With U.S. West Texas Intermediate, however, there are bigger issues.

Oil production across the United States is just shy of 2 million barrels per day lower from record highs of 13.1 million bpd in mid-March. That’s good. And the U.S. labor market made a totally unexpected gain of 2.5 million jobs in May. That’s a double positive.

But there are lots of other negatives with U.S. crude. For one, exports are ebbing—standing at 2.8 million bpd last week compared with a record high of 3.6 million in December. The weekly U.S. oil rig count, an indicator of future production reported by industry firm Baker Hughes, fell just by 16 last week, after drops of more than 60 rigs during certain stretches between March and April when the market selloff triggered by the coronavirus was at its peak.

And while the Energy Information Administration reported a 2.1 million-barrel draw in crude stockpiles, that was largely an adjustment from 4 million barrels leaving the commercial inventory and heading into the Strategic Petroleum Reserve. In reality, crude stocks (commercial + SPR) rose by 1.9 million barrels.

Meanwhile, demand weakness for U.S. fuel products persists. Crude oil input at U.S. refiners rose 316,000 bpd to 13.3 million bpd last week. But this remains 3.87 million bpd, or 23%, below the prior three-year average for the period. The nine-week high in refinery runs last week was a welcome sight.  But the truth is refiners are still chipping away at U.S. and Saudi crude acquired cheaply back in March and April. Current refining margins point to sustained weakness in refinery runs for the weeks ahead.

Now, on to total products supplied. The EIA's proxy measurement for refined product demand plummeted by 892,000 bpd in the week to the Memorial Day holiday—the much-anticipated unofficial kick-off to summer driving demand, which, understandably, was a non-event this year. While products supplied for gasoline rose 4% for the period, implied jet fuel demand fell 55% and distillate fuel oil fell 17%. And it is not just domestic product demand weakness that is to blame. Gasoline exports remain 61% below year-ago levels, while distillate fuel oil exports remain 50% lower year-on-year.

“Product demand weakness, when combined with an uptick in refinery runs, helps explain how total commercial crude and product stocks surged 15.14 million bbl last week,” said Dominick Chirichella of the Energy Management Institute in New York that shared much of these data with Investing.com.

“This marked the largest weekly rise in combined commercial crude and product stocks since the week ending May 1."

Gasoline Recovery Will Be Key For U.S. Oil

Chirichella stresses that recovery in gasoline demand will be key to bringing both refinery margins and crude prices higher in the coming months.

“But with product prices lagging far behind the run-up in crude prices in recent weeks, this rally in crude prices cannot persist without a sharp rebound in product demand ... Diesel and jet fuel demand must follow gasoline higher if a sustained rebound in refinery runs and crude prices is to persist.”

Diesel-led distillate stockpiles as reported by the EIA are their highest since September 2010 and are up nearly 42 million barrels, or 32%, from the prior three-year average for the period.

WTI prices, however, seem totally disconnected from all these. Since bottoming at $10.07 on April 28, the U.S. crude benchmark has made an astronomical gain of 300%.

I concur with Chirichella. To those long WTI, good luck in keeping up with this rally. I really like to see how far you go.

In the case of gold, much depends on what the Federal Reserve decides for policy at its monthly meeting this week, and what Jay Powell, the chairman of the central bank, says in his news conference later. While reading Fed tea leaves is always tricky, I believe we can say with a measure of certainty that negative rates will not be dripping from the Fed chair’s lips this time. Not that it ever has before, and not that we should be expecting it after the surprise in U.S. job gains for May. 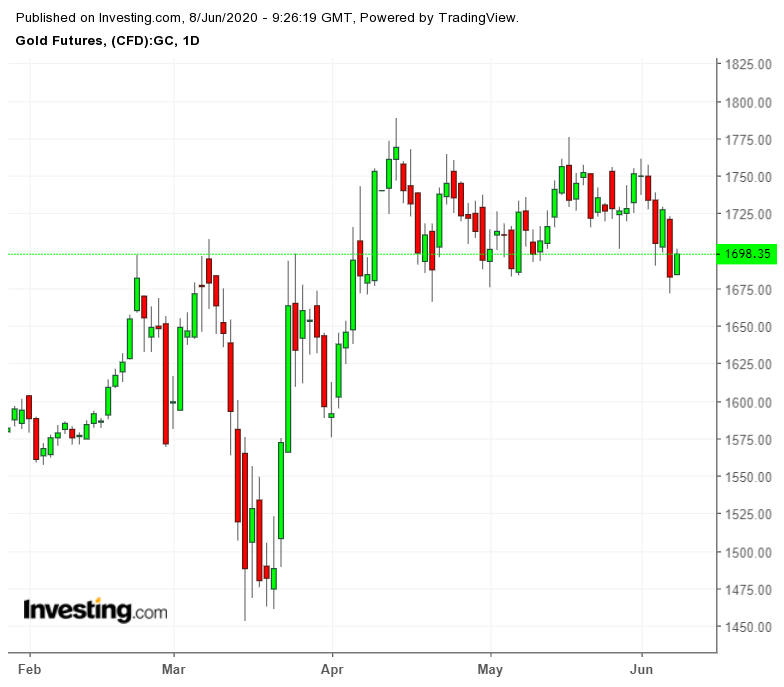 So where does that leave safe-haven gold, with almost every investor from Wall Street to COMEX gung-ho on risk rather than safety?

Happy week ahead and be safe, everyone.