Chart Of The Day: Why Bitcoin Is Falling; How To Trade It Now

Chart Of The Day: Why Bitcoin Is Falling; How To Trade It Now

Bitcoin is dropping again, its seventh straight losing session out of 10, pushing the price to below the $7000 mark for the first time in six months. Why now?

Here are some possible reasons:

For many who own and trade digital currencies it's more than an investment, it's a way of life. Some see other drivers:

One of Bitcoin’s key selling points is the fact that it’s unregulated. That means neither governments nor investors really know what’s going on. Our bet then is that each of these points have some contributing influence over traders, even if it's just solely about sentiment.

Perhaps then, it's most prudent to simply keep tracking the balance of supply and demand, whether driven by fundamentals or not. 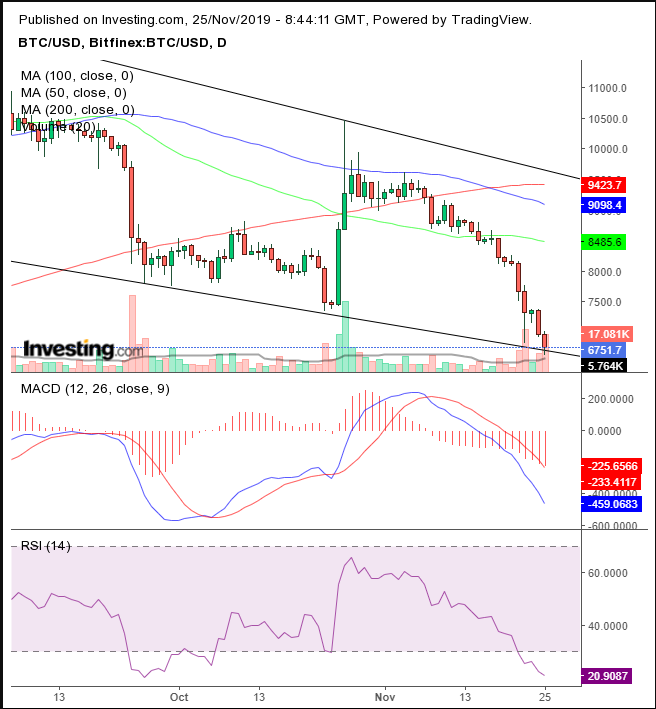 Bitcoin has been trading within a falling channel since the June 26, $13,764 high. Today, it dipped below the lower boundary of the channel for the first time in its duration. However, for now, it's bounced back above, suggesting support.

The drop is very hard, as shown by the volume, the second biggest selling volume (after Friday’s) since Sept. 24. This dispels the argument that low volume is responsible for the big moves. Indeed, volume has been broadly muted since the bubble burst in late 2017.

Exactly one month ago, the 200 DMA climbed over the 50 DMA, triggering a death cross, proceeding to cross over the 100 DMA, forming the triple, bearish pattern.

With the MACD low and the RSI at its lowest since September, as the price is finding support, it may be time for either a return move to the channel top or for a downside breakout, with a filter to avoid a bear trap. This would be followed by a return move that would confirm the channel bottom’s new resistance.

Conservative traders would wait for a full pullback to the channel top, confirmed with at least one long red candle from the very top.

Moderate traders would wait for a return move until the correction weakens.

Aggressive traders may enter a contrarian trade and go long on the potential bounce.