Chart Of The Day: S&P 500 Setting Up For Another Selloff

Chart Of The Day: S&P 500 Setting Up For Another Selloff

After yesterday’s second 4% surge for U.S. equity markets within three days, it's clear that bulls are getting hungrier. However, we would urge caution: this exuberance is not likely to last. In fact, we expect the S&P 500 is about to tumble.

Since Friday, which capped the worst sell off in U.S. stocks since the 2008 crash, the benchmark index has zigzagged every day. On Monday the SPX rebounded, surging over 4% after news that Group of Seven finance ministers and central bankers would hold a teleconference Tuesday to discuss how to respond to the fast-spreading coronavirus outbreak.

Earlier today, U.S. futures bucked the Asian session rally. Bullish investors might have laughed it off as just profit-taking after yesterday’s 4% surge, the second within 3 days. Maybe. But European stocks are lower as well.

So maybe it's not about profit taking. From a technical perspective, the S&P 500’s risk is to the downside. 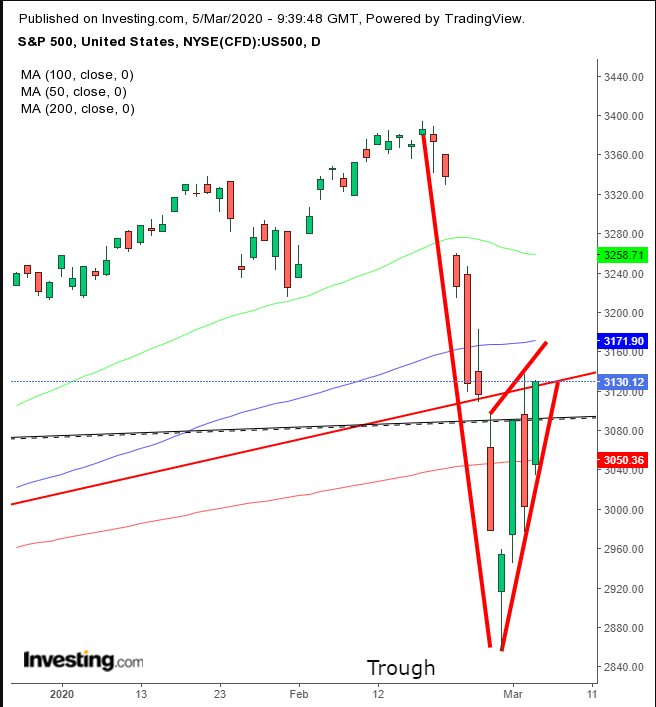 The S&P 500 index has been converging with an upward tilt since the Feb. 28 bottom, following a straight line down since Feb. 19. That constitutes a rising flag, expected to follow with a downside breakout, after bears drown out all demand at current levels.

The fact that the pattern is developing right after breaking the uptrend line since January 2019, reinforced by the 200 DMA, further indicates the 3,100 level is a red line between bears and bulls. We expect a downside breakout. If one does take place, we’d set our eyes on a repeated down-move equal in intensity to the one that preceded this façade of an equilibrium.

Conservative traders would wait for a second trough to form, establishing a downtrend, then wait for a pullback to retest resistance and confirm the downtrend.

Moderate traders are likely to jump in after a downside breakout, preferably on a closing basis.

Aggressive traders may risk a short now, since the price is at the top of the pattern, providing they understand the risk and write an appropriate plan that fits their budget.