Chart Of The Day: Safe-Haven Or Not, Bitcoin Offers Selling Opportunity

Chart Of The Day: Safe-Haven Or Not, Bitcoin Offers Selling Opportunity

There has been a lot of talk about whether Bitcoin (BTC/USD) has finally become a safe-haven asset, where investors hide their money amid market turmoil — echoing the claims of enthusiasts since its inception.

And indeed, the most popular crypto currency by market cap has surged over 23% since July 31, concurrently with the equity markets sell-off which saw the S&P 500 index shedding more than 5% of value. Also, while the SPX recouped more than 1% yesterday, the generally volatile BTC had its first down-day during the same period, declining 2.85%.

So, has Bitcoin replaced gold as a safe-haven? Well, the yellow metal also rose yesterday. Could it be creeping into the yen's territory as a go-to asset during uncertain conditions? The yen, in fact, did weaken yesterday, together with Bitcoin. On the other hand, yields – one of the most important safe-haven assets among institutions – fell with gold.

Whether Bitcoin did become a haven asset temporarily, or has become one permanently, or hasn't become one at all, the supply-demand map suggests a potential sales entry with attractive risk-reward ratios. 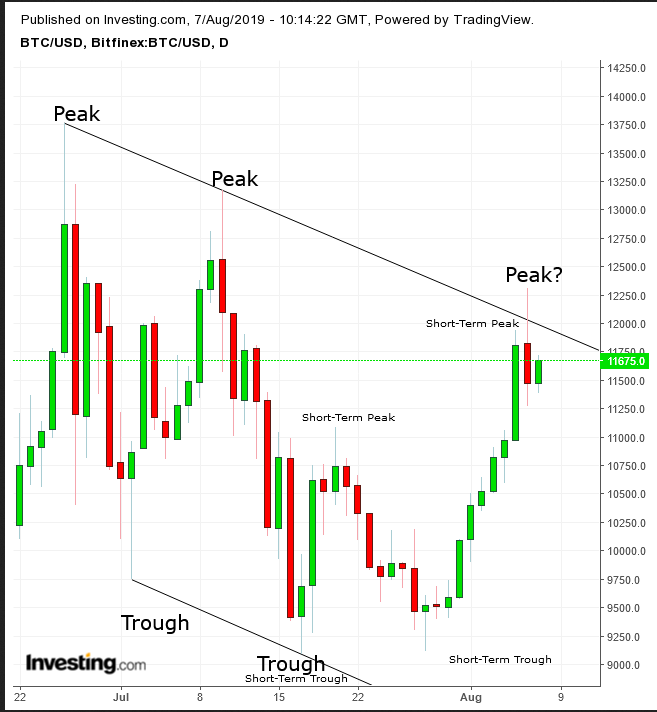 The price dropped after testing the top of a falling channel in place since June 26, confirming resistance provided by increasing selling pressure, for the first time in eight days, after the cryptocurrency's longest running rally in the past year that ended with the formation of the falling channel.

If the falling channel persists – and all things being equal, at any given point, it is more likely to continue than not – it will provide a phenomenal risk-reward ratio, given that we’re near the top.

would wait for the medium-term to align with the long-term uptrend, for a long position.

Moderate traders may short upon a return move.

Aggressive traders may short at will, providing they operate according to a predetermined plan.

Note: If the price does resume along the current trading pattern and tests the July lows, it will provide a 25% move, a 1:10 RRR, and it could be just as fast – if not faster – than the 25% on the way up this month.