Bitcoin’s deep plunge yesterday may be a signal that the biggest digital currency by market cap is about to fall even further. The purported long squeeze—when leveraged long positions are hit with margin calls—has set Bitcoin on a path toward $6,000.

We've been monitoring Bitcoin’s pattern development since July, waiting for the next stage of a decline. This now appears to have arrived.

After yesterday’s 11.9% plunge, we expect this to be the first leg within a persistent selloff, once the price falls below the supportive 200 DMA. The 50 DMA already fell through the 100 DMA for the first time in 10 months, preceding a 50% drop. 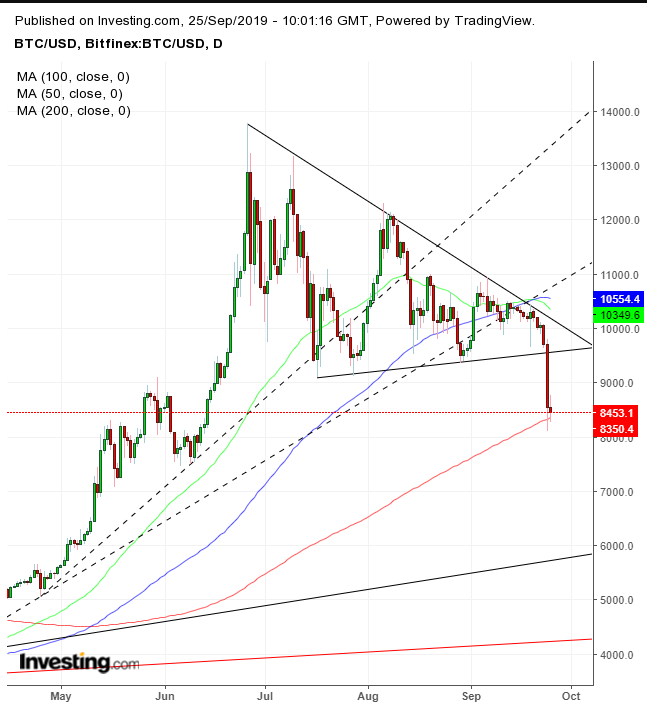 The trading pattern since June has developed into a mostly descending triangle. The dynamics of this market are such that supply outpaces a demand that attempts to push back but ultimately fails. The extreme downside breakout demonstrates just how overwhelmingly supply overcame demand.

The 100 DMA has been supporting the price for the second day, and it's reasonable expect it could aid in a return move to retest the pattern’s integrity. Once the price does fall below the 200 MA —which coincides with the May-June congestion, in which many traders participated and are therefore likely to remember those prices—the next major support is the uptrend line since the February bottom.

For now, the descending triangle’s implied target is $5,000 (red uptrend line), but as stated, the uptrend line may prop the price above $6,000.

Conservative traders would wait for a return move to retest the reversal with a second fall to a close below the 200 DMA.

Moderate traders may be content with a pullback for a better entry but not necessarily to wait and see that supply overcomes demand.

Aggressive traders may enter a contrarian position now, going long, counting on a return move that follows what would be interpreted as an exaggerated move.