Are Facebook Shares A Bargain In This Market Rout?

Are Facebook Shares A Bargain In This Market Rout?

Facebook (NASDAQ:FB) investors have been hit hard and fast over the past month. Shares of the world’s largest social media platform have been plummeting in tandem with the S&P 500’s spectacular 25% dive, dropping into a bear market this month.

The stock, which surged to a record high of $224.20 on Jan. 29, has fallen more than 31% in the past month, underperforming the tech-heavy NASDAQ's 25% slump during the same period. Trading at $149.42 at yesterday's close, FB stock is near the lowest level since January 2019, having given up most of its gains of the past year.

For many analysts, it’s hard to quantify the impact of an imminent global recession for social media companies — all relatively young enterprises that are the product of the unprecedented economic boom of the past decade. That growth provided the backdrop for the longest bull run in the U.S. stock market's history, powered by top technology companies, including Facebook, Amazon (NASDAQ:AMZN) and Apple (NASDAQ:AAPL). 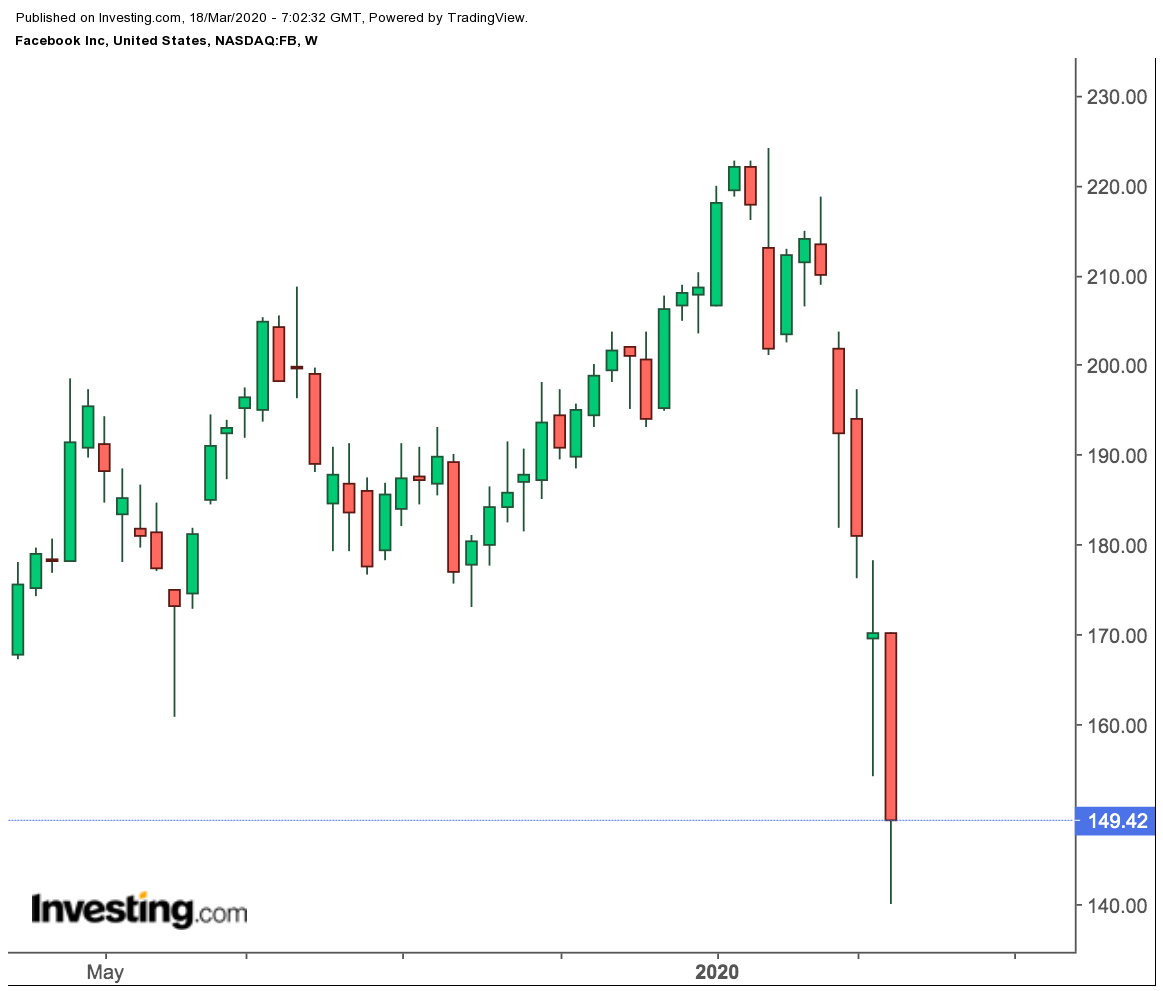 But after a slide of this magnitude, investors are wondering whether Facebook will be able to emerge unscathed from the coming economic downturn — which is likely to see advertisers cut their budgets drastically.

During a typical recession, investors generally take refuge in solid companies which have gone survived previous recessions, pay dividends and are cash rich. It's for these reasons analysts on Wall Street this week upgraded many staple stocks, such as Procter & Gamble (NYSE:PG) and Walmart (NYSE:NYSE:WMT). Each is defensive in nature and all have a solid track record of surviving multiple down cycles.

But that's not true for Facebook. Despite its leading share in the social media ad market, Needham analyst Laura Martin said in a recent note that 30% to 45% of Facebook's global revenue comes from advertising categories deemed "at risk" from Covid-19.

In addition, Martin said, six of the 10 largest countries in which advertising proliferates are currently Covid-19 hot spots.

"Our channel checks indicate lower spending in travel, retail, consumer packaged goods, and entertainment, which together represent 30%-45% of Facebook's total revenue," Martin wrote in a note to clients. "As consumer demand has fallen, advertising projections have started to decline," she said.

Martin added that Facebook had 7 million active advertisers at the end of 2019, "suggesting that many are small and may have to eliminate ad spending to survive."

Even before the outbreak of coronavirus, the stock was showing signs of peaking as sales growth slowed. The outlook became even more uncertain amid multiple antitrust probes and more-restrictive privacy regulations globally.

Facebook’s CFO David Wehner said during his earnings call in January that most of the impact of these headwinds still lies ahead as the quarterly results don’t yet reflect the effects of privacy rules like Europe’s General Data Protection Regulation and the California Consumer Privacy Act.

"We expect our year-over-year total reported revenue growth rate in Q1 to decelerate by a low- to mid-single digit percentage point as compared to our Q4 growth rate,” said Wehner. “Factors driving this deceleration include the maturity of our business as well as the increasing impact from global privacy regulation and other ad targeting related headwinds.”

We don’t favor buying Facebook stock in these uncertain times. The company’s business model is untested for the kind of massive economic shock the global economy is now facing. The combination of tightening regulations and the economic slowdown triggered by a recession means more pain ahead for Facebook.