After A Rough 2 Years, Will Coffee Be Percolating On The Upside Again?

After A Rough 2 Years, Will Coffee Be Percolating On The Upside Again?

This article was written exclusively for Investing.com

Arabica coffee beans trade in the futures market on the Intercontinental Exchange ICE. Coffee is a member of the highly volatile, soft commodity sector of the asset class. As an agricultural commodity, one of the most significant factors for the path of least resistance of the price of coffee beans is the weather in the leading growing regions of the world. Each year is a new adventure in the coffee market because of the weather, as well as the short-shelf life of the product. Coffee beans can only sit in storage facilities for a brief period before they lose aroma and potency.

While supplies of coffee each year can vary significantly, the demand side of the fundamental equation continues to be an ever-increasing factor. At the turn of this century, approximately six million people populated our planet. According to the US Census Bureau, over the past two decades, the number has grown by 27.5% to more than 7.65 billion.

The addressable market for coffee has been accelerating by leaps and bounds. Aside from population growth, more people in Asia have switched from tea to coffee consumption. Over the past years, Starbucks (NASDAQ:SBUX) opened over 5000 stores in China, and many other copycat coffee shops have popped up in the world’s most populous nation. Each year, the demand for coffee beans increases and production must keep up with the trend in consumption.

Since the early 1970s, the price of coffee futures on ICE has traded as low as 41.50 cents per pound and as high as $3.375 per pound. Coffee is a highly volatile commodity, and at just below the $1 level at the end of last week, it was closer to the long-term low than the high. Coffee is near the low end of its pricing cycle. 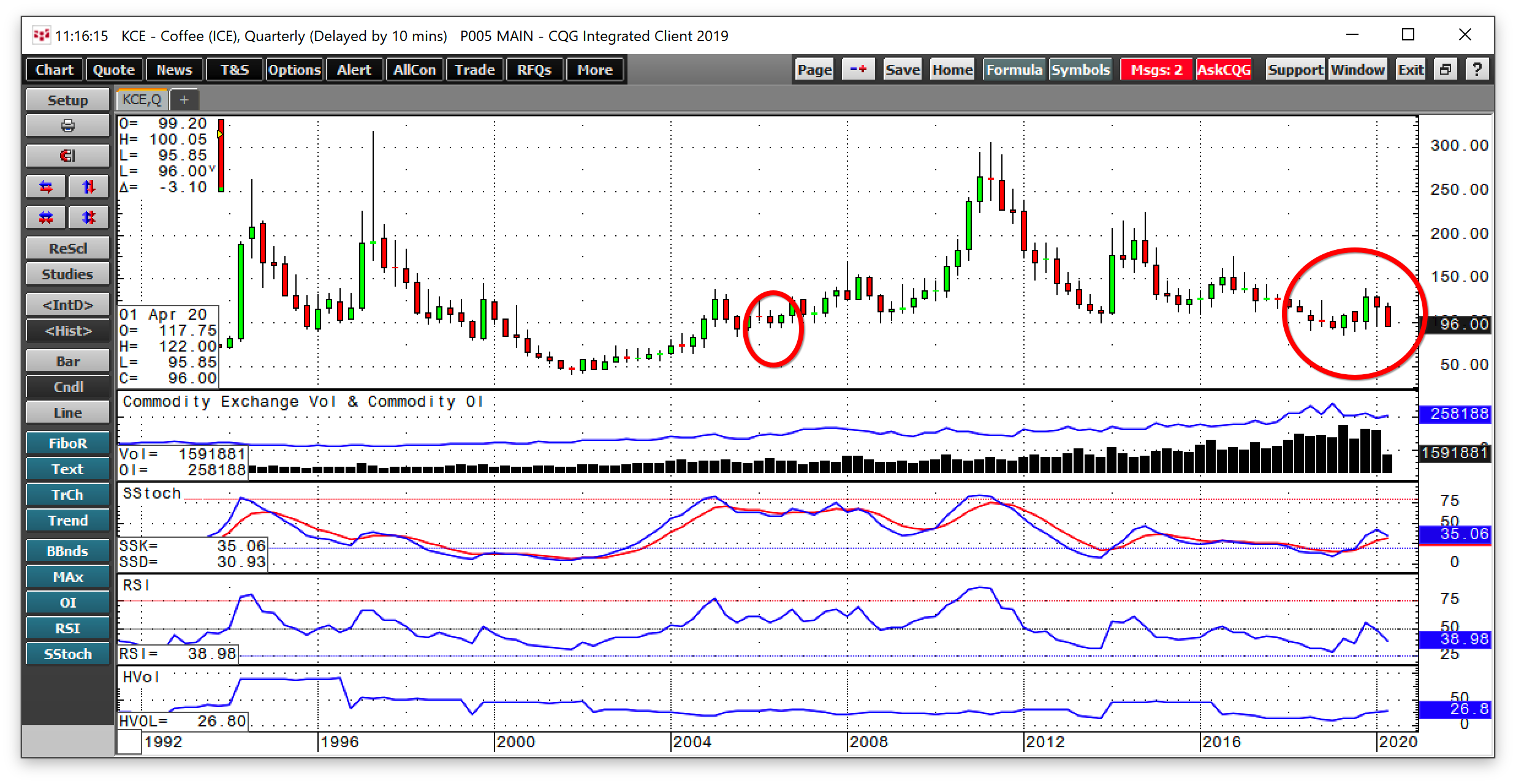 The low during this century came last year. The high was at $3.0625 in 2011, when commodity prices experienced a secular rally. The recent low prices occurred because of sufficient supplies that satisfied global demand. However, the currency market plays a significant role when it comes to price weakness in the coffee futures market.

Brazil is the leader in output

Brazil is the world’s leading producer of Arabica coffee beans. While the US dollar is the world’s reserve currency and the pricing mechanism for the coffee futures market, the Brazilian real plays a substantial role in Brazil’s production costs. A weak real makes Brazilian exports more competitive in global markets, and the currency has been falling like a stone since 2011.

Coffee is not the only commodity that comes from Brazil. The South American nation is also a leading producer of sugar, oranges, ethanol, and a host of other raw materials and agricultural products. A secular rally in the commodities market could push the level of the real higher over the coming years. It would increase revenues for producers and tax collections for the government.

The global financial crisis in 2008 caused a flood of liquidity from central banks and governments in the form of stimulus to stabilize economic conditions worldwide. From June through September 2008, the US Treasury borrowed a record $530 billion to fund stimulus. In May 2020, coronavirus’s impact caused the Treasury to borrow $3 trillion, and there is likely more borrowing on the horizon.

A significant reason why commodities prices rallied to multiyear or all-time highs in 2011 was the delayed impact of the stimulus. The waves of liquidity weighed on the purchasing power of all fiat currencies. Moreover, the risk-off behavior in markets in the aftermath of the 2008 crisis caused many producers to reduce output.

In the world of commodities, the cure for low prices is low prices. Demand increased at low price levels at a time when production slowed, leading inventories to decline. By 2011, shortages pushed the prices of many commodities to lofty levels. In 2020, the waves of liquidity turned into a tidal wave. A similar response from markets over the coming months and years could ignite a rally in commodities that replicates or perhaps dwarfs the price action that took them to peaks in 2011. 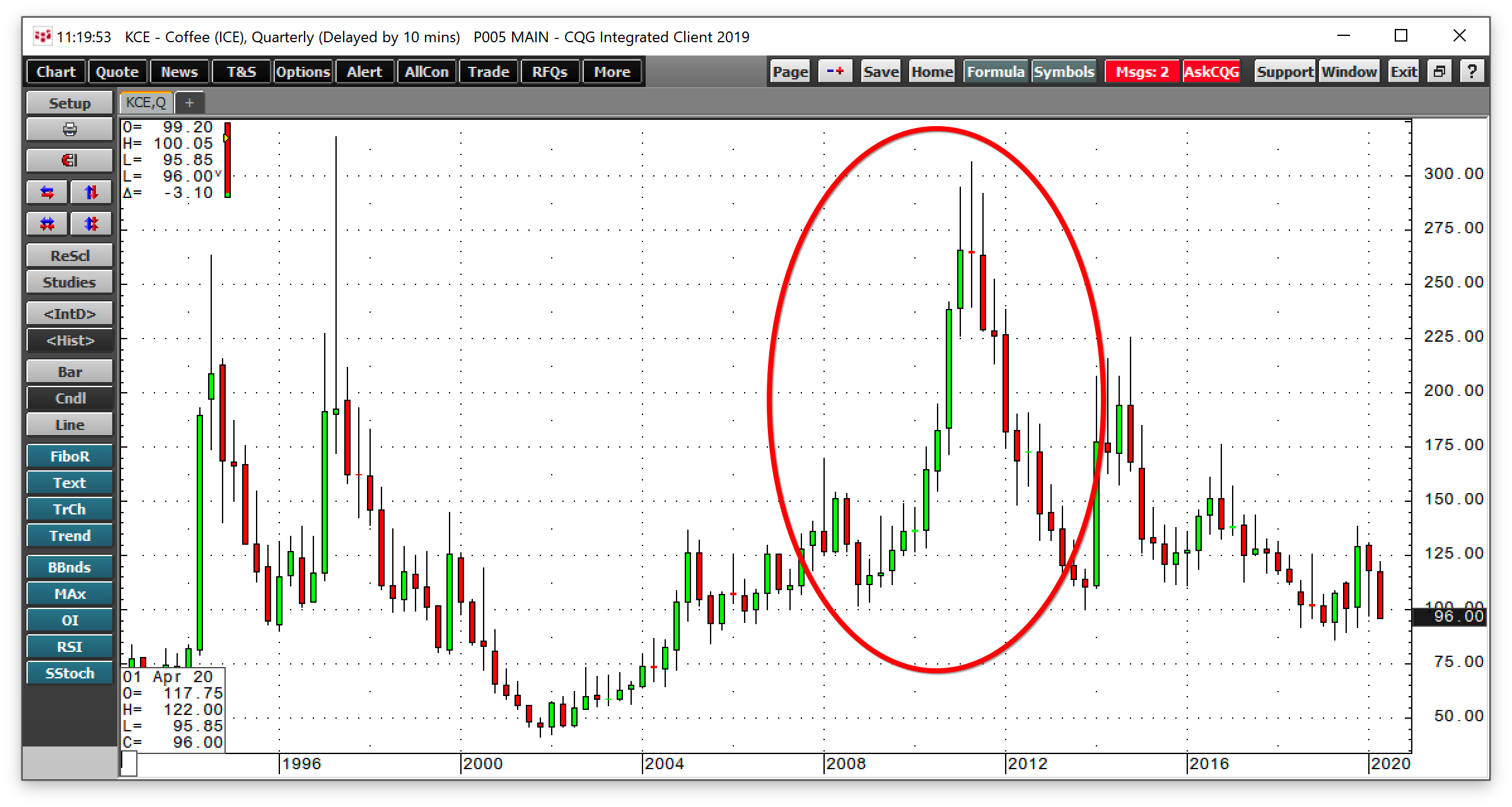 At below the $1 per pound level on the nearby coffee futures contract, risk-reward favors the upside. An inflationary surge or rally in the Brazilian real versus the US dollar could cause coffee prices to percolate on the upside once again.