Joe Biden may only have assumed the office of President of the United States yesterday, but his administration is already making big changes to the country's energy policy.

In one of his first executive orders, signed after the inauguration, he revoked}} the permit for the Keystone XL Pipeline. TC Energy (NYSE:TRP) (TSX:TRP), the Canadian company building the pipeline, said it would consider its options but would suspend all work on the pipeline in the meantime. We may see legal maneuvers or diplomatic pressure by the Canadians, but for now as many as 8,000 people in the United States have lost their jobs.

Still, revoking the permit for the Keystone XL pipelines won’t have a serious, direct impact on oil prices. 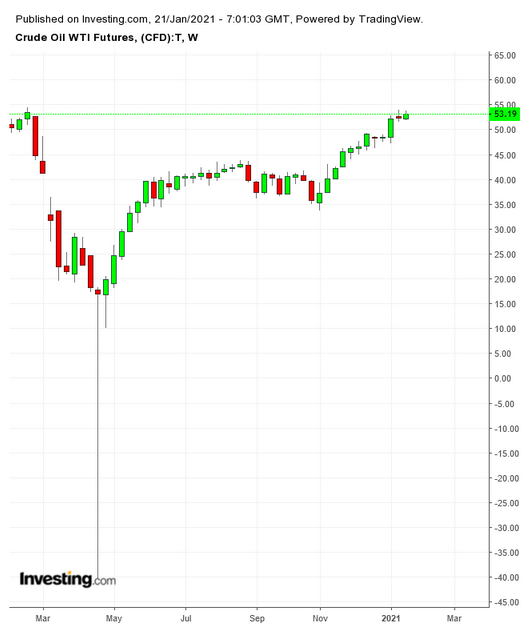 It does say, however, that oil traders will need to watch the actions of the Biden administration as other policies could impact oil and gas markets.

Here are 8 potential policy moves traders may see from D.C. and the potential impact they would have on the market.

This would have little immediate impact on the supply-side as offshore drilling projects can take years to get up and running. The market probably wouldn’t react all that much if this occurs.

2. Complicating permitting for fracking or ending it entirely on federal lands

This move wouldn’t impact wells already drilled or permits already in place, so the supply of oil from the U.S. wouldn’t change immediately, but it would hurt future prospects.

This would have a faster impact on oil supply from the U.S. than ending offshore drilling permits. A move like this would almost certainly impact prices, especially WTI, in the short term.

3. Refuse permits or buyback leases to drill for oil in ANWR

This move is likely forthcoming, but it should not impact the market. The Arctic National Wildlife Refuge (ANWR) was only recently opened for drilling permits by the Trump administration, and the lease auction did not generate much interest.

Only two small companies purchased small leases. No big oil companies with the capital to actually bring projects in the arctic to fruition even bid on leases.

The rest of the leases were purchased by the state of Alaska, which can hold them for 10 years in hopes that when political and/or price conditions change, they can sell them to companies that might be interested in producing. It is very unlikely that we were going to see any more oil production coming from this part of Alaska anyway, so even if the Biden administration has the federal government buy the leases back from Alaska’s state development corporation, it won’t impact the market.

4. Limitations on energy infrastructure in the U.S.

Putting in place regulations that limit refinery expansions, pipeline projects or the expansion or upgrade of ports could limit crude oil supplies as well as hit the refined products market. If the government makes it more difficult for crude oil to be transported, refined or exported then traders should expect to see stocks of crude oil in the U.S. grow until producers are forced to curb production.

This move, however, is very unlikely.

U.S. LNG exports have grown significantly in recent years. In fact, during November 2020, the U.S. had record high exports of LNG.

The growth of liquefaction facilities as well as pipelines to transport natural gas to the facilities has helped spur this growth. If the Biden administration decides to curb the growth of either of these or put restrictions on the places where U.S. facilities can export natural gas, then U.S. LNG exports will be hurt.

7. Regulation on oil and gas production

The Biden administration is likely to increase regulations that govern methane release and flaring. They could also issue new regulations governing water use and seismic implications of fracking.

The Biden administration is likely to pursue higher emissions standards for cars and other vehicles in the U.S.

The Obama administration promoted EVs with tax incentives, but the Biden administration could try to implement regulations that would push consumers towards EVs in a more aggressive way. These types of policies could change {{954867|gasoline consumption in the U.S. such that oil prices are impacted.